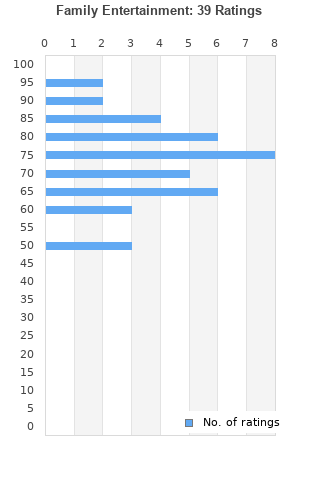 FAMILY - FAMILY ENTERTAINMENT LP UK 1ST PRESS TRI COLOUR REPRISE RSLP 6340 PSYCH
Condition: Used
Time left: 12h 20m 23s
Ships to: Worldwide
£34.99
Go to store
Product prices and availability are accurate as of the date indicated and are subject to change. Any price and availability information displayed on the linked website at the time of purchase will apply to the purchase of this product.  See full search results on eBay

Family Entertainment is ranked 3rd best out of 9 albums by Family on BestEverAlbums.com.

The best album by Family is Music In A Doll's House which is ranked number 4904 in the list of all-time albums with a total rank score of 272. 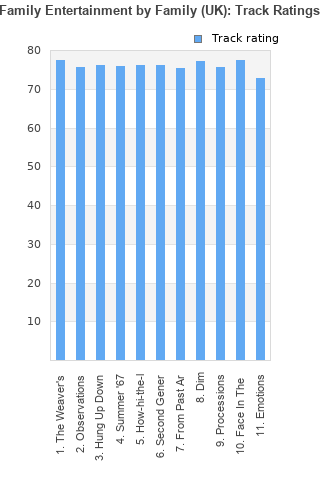 Rating metrics: Outliers can be removed when calculating a mean average to dampen the effects of ratings outside the normal distribution. This figure is provided as the trimmed mean. A high standard deviation can be legitimate, but can sometimes indicate 'gaming' is occurring. Consider a simplified example* of an item receiving ratings of 100, 50, & 0. The mean average rating would be 50. However, ratings of 55, 50 & 45 could also result in the same average. The second average might be more trusted because there is more consensus around a particular rating (a lower deviation).
(*In practice, some albums can have several thousand ratings)
This album has a Bayesian average rating of 73.7/100, a mean average of 73.9/100, and a trimmed mean (excluding outliers) of 73.9/100. The standard deviation for this album is 10.3.

Very fine album, almost as good as Fearless and definitely a step up from their debut Music In A Doll's House. Lots of fine musicianship and experimentation, well worth tracking down.

Family's second album "Family Entertainment" since 1969, clearly is among group's best releases; in fact perhaps the album is their most seamless.

The original line-up is still intact and the group's songwriting (mostly Chapman / Whitney)) is original, exciting and versatile. Many genres are touched upon, without compromising the overall feel, and there is varied and tasteful instrumentation. Not the least important is it that the band's desire to experiment does not go beyond the melodic which to the finest degree characterizes the entire album.

On this excellent record you'll find some of the group's live favorites. Not least, the outstanding "The Weaver's Answer" which is one of the finest recordings the group has released. Among other highlighs there is "Observations From a Hill", which funny enough here on the original album is not sung by Chapman, perhaps a fact which also in a positive way helps to vary the overall impression of variety. Chapman's version can be found on "Old Songs New Songs" - a version which must not be overlooked. On these two cuts the group is stronly related to contemporary groups like Traffic and Jethro Tull.

On the "Hung Up Down" we hear the groups sounding more like Family on their later albums, also a very strong track. The instrumental "Summer 67" is for an instrumental very interesting, very inspired by oriental sounds and tones.

Bassist Rick Grech, who left Family immediately after this album contributes to writing songs on four tracks. "How Hi the Li" is one of those, and it is an exciting number a little in the vein of Cream on "Wheels of Fire", maybe the song does not quite have the catchiness the Chapman / Whitney songs. On the other hand Grech shows on "Second Generation Woman" a strong flair for writing a straight-forward rocker - a number that must have had clear hit potential.

"From Past Archives" is a sad and small acoustic tune that shows the group was a little rare soft side, but also a little surprising change of style towards the jazzy. Indeed, it is worth listening to acoustic guitar through the album, very well played and well-produced.

The song "Dim" is one of my big favorites, a little in JJ Cale style - would really like to hear a Cale version of this little laid-back tune with a very catchy chorus. "Procession" is equally strong, almost country - again with nice acoustic guitars. "Face In The Cloud" is Grech again - you'll notice his songwriting a little different - not bad but different.

The closing track "Emotions" is a Whitney / Chapman / Grech collaboration - and a fine and worthy one too. Definitely an album that is among the classics of the late 1960's.

Your feedback for Family Entertainment