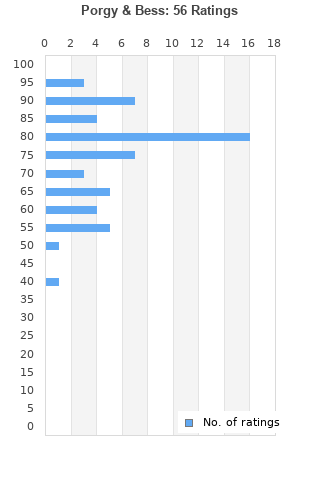 Porgy & Bess by Ella Fitzgerald/Louis Armstrong (CD, 1987, Verve)
Condition: Good
Time left: 14h 22m 27s
Ships to: Worldwide
$5.93
Go to store
Product prices and availability are accurate as of the date indicated and are subject to change. Any price and availability information displayed on the linked website at the time of purchase will apply to the purchase of this product.  See full search results on eBay

Porgy & Bess is ranked 2nd best out of 5 albums by Ella Fitzgerald & Louis Armstrong on BestEverAlbums.com.

The best album by Ella Fitzgerald & Louis Armstrong is Ella & Louis which is ranked number 1165 in the list of all-time albums with a total rank score of 1,567. 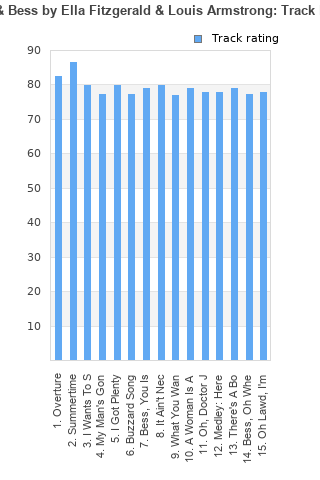 Rating metrics: Outliers can be removed when calculating a mean average to dampen the effects of ratings outside the normal distribution. This figure is provided as the trimmed mean. A high standard deviation can be legitimate, but can sometimes indicate 'gaming' is occurring. Consider a simplified example* of an item receiving ratings of 100, 50, & 0. The mean average rating would be 50. However, ratings of 55, 50 & 45 could also result in the same average. The second average might be more trusted because there is more consensus around a particular rating (a lower deviation).
(*In practice, some albums can have several thousand ratings)
This album is rated in the top 19% of all albums on BestEverAlbums.com. This album has a Bayesian average rating of 74.8/100, a mean average of 75.1/100, and a trimmed mean (excluding outliers) of 75.1/100. The standard deviation for this album is 12.7.

A beautiful version of the Gershwin's classic. Both Louis Armstrong and Ella Fitzgerald are on top form and thankfully Fitzgerald doesn't slip into any scatting histrionics. A lovely record.

While Summertime is timeless, I didn't really fall in love with it. I think with most things like this (Opera/Musical) you have to experience it live, not just listening to a recording. If you've fallen in love with it live, you'll love the recording. The score I'm giving is strictly on the recording as I don't have a connection with the opera yet. Most Operas/Musicals have a popular theme and the rest of it musically isn't "catchy" rather is part of the story. Also I rated the songs at a 70 because they are musically interesting in of themselves, but as an over all album I rank it a 60 because I didn't really jive with the whole thing...it was just a random collection of songs telling a story I am not familiar with.

More listenable than the Gershwin opera. A great addition for fans of Ella and Louis.

Your feedback for Porgy & Bess