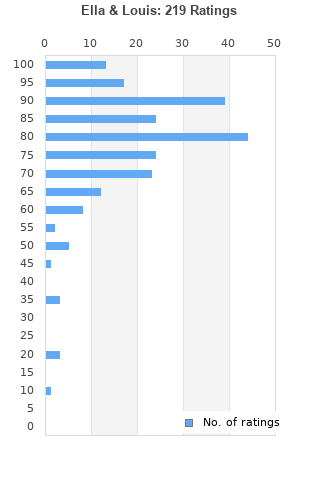 French Kiss - OST Soundtrack CD - Van Morrison, Louis Armstrong, Ella Fitzgerald
Condition: Good
Time left: 6h 16m 11s
Ships to: Worldwide
£3.49
Go to store
Product prices and availability are accurate as of the date indicated and are subject to change. Any price and availability information displayed on the linked website at the time of purchase will apply to the purchase of this product.  See full search results on eBay

Ella & Louis is ranked as the best album by Ella Fitzgerald & Louis Armstrong. 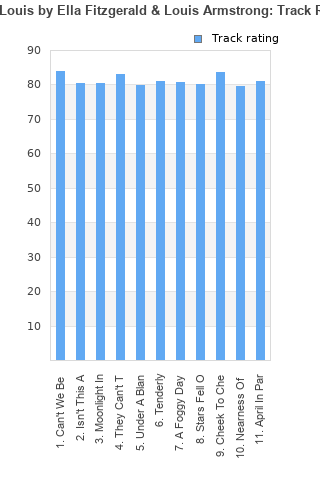 Rating metrics: Outliers can be removed when calculating a mean average to dampen the effects of ratings outside the normal distribution. This figure is provided as the trimmed mean. A high standard deviation can be legitimate, but can sometimes indicate 'gaming' is occurring. Consider a simplified example* of an item receiving ratings of 100, 50, & 0. The mean average rating would be 50. However, ratings of 55, 50 & 45 could also result in the same average. The second average might be more trusted because there is more consensus around a particular rating (a lower deviation).
(*In practice, some albums can have several thousand ratings)
This album is rated in the top 2% of all albums on BestEverAlbums.com. This album has a Bayesian average rating of 79.8/100, a mean average of 79.2/100, and a trimmed mean (excluding outliers) of 80.2/100. The standard deviation for this album is 15.1.

Such a perfect collab makes nearly every song here a classic. Ella's absolutely wonderful Voice and Louis's deep tone, both in his playing and in his singing completes each other in a unique way, never quite to be done again.

For the majority of us in this site, this album represents a part of recent history of human relationships that we don't really know how It was, so hearing songs like "Cheek to Cheek" feels as If we were travelling in a time were everything, to us, seemed so simple.

Favorites: Can't We Be Friends, Under A Blanket Of Blue, Cheek To Cheek.

I usually prefer instrumental bop influenced jazz, finding the pop influenced vocal jazz music to be lacking in much depth, bu this album is definitely an exception. The interplay between the two voices and between Ella's singing and Louis' trumpet are exceptional. As well, the backing band does a terrific job, particularly Oscar Peterson on the piano. An excellent and smooth pop album from the jazz era.

Really a great album and an interpretational classic / Ella and Louis are great vocalists who complement each other beatifully (Ella's velvet and Satchmo's roar of thunder).
Definitely recommendable to hear on a rainy Sunday or e.g. here at Christmas.
Merry Christmas to all music lovers and thank you so much to the creators for a great community.

5 first songs they do omgoddishly. and the ender. the rest is good too. nothing bad here.

Your feedback for Ella & Louis