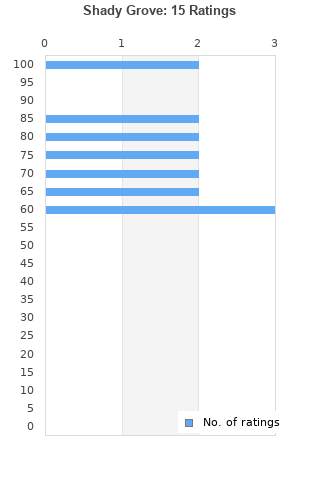 Shady Grove is ranked 3rd best out of 14 albums by Quicksilver Messenger Service on BestEverAlbums.com.

The best album by Quicksilver Messenger Service is Happy Trails which is ranked number 2410 in the list of all-time albums with a total rank score of 654. 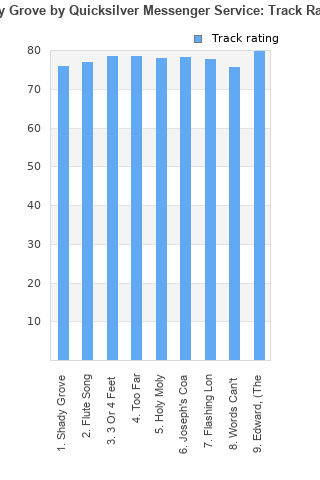 Rating metrics: Outliers can be removed when calculating a mean average to dampen the effects of ratings outside the normal distribution. This figure is provided as the trimmed mean. A high standard deviation can be legitimate, but can sometimes indicate 'gaming' is occurring. Consider a simplified example* of an item receiving ratings of 100, 50, & 0. The mean average rating would be 50. However, ratings of 55, 50 & 45 could also result in the same average. The second average might be more trusted because there is more consensus around a particular rating (a lower deviation).
(*In practice, some albums can have several thousand ratings)
This album is rated in the top 6% of all albums on BestEverAlbums.com. This album has a Bayesian average rating of 76.4/100, a mean average of 79.5/100, and a trimmed mean (excluding outliers) of 79.5/100. The standard deviation for this album is 12.1.

Nicky Hopkins once said something to the effect that all he could remember of this period was that the band was never in tune.

Too bad, because I felt like the album was quite alright, finally giving us a record of the actual quality and distinctiveness of the band. "Edward" is entirely bonded to Hopkins' memory, but "Too Far" and "3 or 4 feet" and "Flashing Lonesome..."

Great album with clever songwriting and a killer finale

Edward, the Mad Shirt Grinder is an insane song.

Don’t really get why there isn’t more love for this album. Some stunning musicianship going on here.

Your feedback for Shady Grove