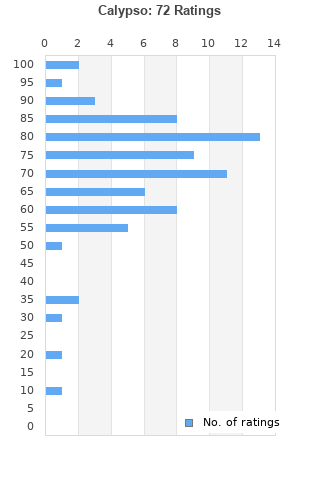 Harry Belafonte bananaboat 4 CD Set. Like New Condition! Mint
Condition: Like New
Time left: 1h 32m 56s
Ships to: Worldwide
$19.99
Go to store
Product prices and availability are accurate as of the date indicated and are subject to change. Any price and availability information displayed on the linked website at the time of purchase will apply to the purchase of this product.  See full search results on eBay

Calypso is ranked as the best album by Harry Belafonte. 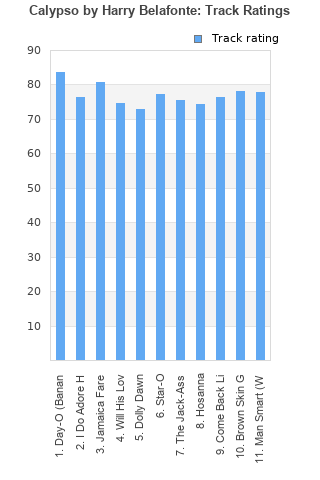 Rating metrics: Outliers can be removed when calculating a mean average to dampen the effects of ratings outside the normal distribution. This figure is provided as the trimmed mean. A high standard deviation can be legitimate, but can sometimes indicate 'gaming' is occurring. Consider a simplified example* of an item receiving ratings of 100, 50, & 0. The mean average rating would be 50. However, ratings of 55, 50 & 45 could also result in the same average. The second average might be more trusted because there is more consensus around a particular rating (a lower deviation).
(*In practice, some albums can have several thousand ratings)
This album has a Bayesian average rating of 72.3/100, a mean average of 71.1/100, and a trimmed mean (excluding outliers) of 72.1/100. The standard deviation for this album is 16.6.

Anyone interested in diving into Calypso should probably check out this album, but don't forget to check out the Trinidadian Calypso from this era as well. Prior to Trinidad & Tobago's independence from the UK, a lot of Calypsonians used their music to talk about the systemic oppression of Trinidadian people by the British. Belafonte's music hits a bit of a lighter note more palatable for American ears at the time. All still wonderful music though.

'Day-O' and 'Jamaica Farewell' are some favourites. Certainly an improvement from his previous effort on 'Belafonte'. A good album overall.

This is fun, but not as strong as his previous album, Belafonte.

not exactly my style but i thoroughly enjoyed it

Your feedback for Calypso