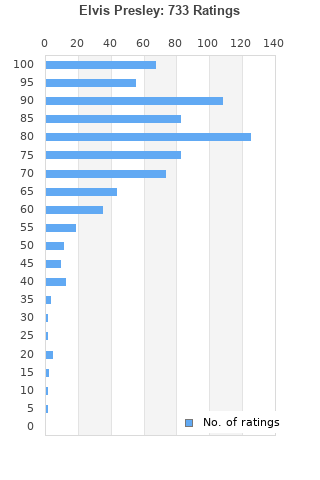 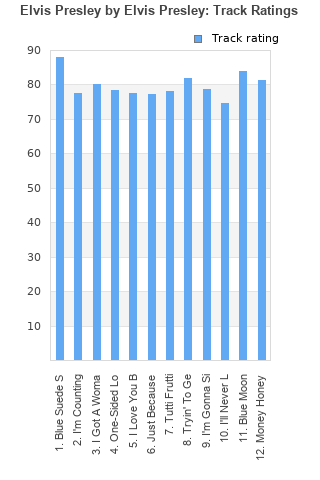 Rating metrics: Outliers can be removed when calculating a mean average to dampen the effects of ratings outside the normal distribution. This figure is provided as the trimmed mean. A high standard deviation can be legitimate, but can sometimes indicate 'gaming' is occurring. Consider a simplified example* of an item receiving ratings of 100, 50, & 0. The mean average rating would be 50. However, ratings of 55, 50 & 45 could also result in the same average. The second average might be more trusted because there is more consensus around a particular rating (a lower deviation).
(*In practice, some albums can have several thousand ratings)
This album is rated in the top 2% of all albums on BestEverAlbums.com. This album has a Bayesian average rating of 79.3/100, a mean average of 78.5/100, and a trimmed mean (excluding outliers) of 79.4/100. The standard deviation for this album is 15.7.

An inconsistent release from Elvis with some major highs and some pretty poor lows. Some songs sound very messy and like they are almost unfinished. The music is a bit simplistic at times as well and is unpolished. However, there is a lot of energy on this release with Elvis completely dominating with his performance on every track. He really does propel this album to another level with just his charisma and vocal style. Songs like Tutti Frutti and Blue Suede Shoes along with a few other tracks really carry the album and you find yourself waiting for these sudden injections of energy and passion. Overall, this is a very enjoyable album but there is a lot that could be improved upon on here.

Elvis shows here why he is one of the true founders of the mainstream Rock N’ Roll movement with this short but snappy album. Although a bouncy bop for the vast majority of the album, there are parts which show Elvis experimenting with his voices to differing levels of effectiveness. On the track “Blue Moon”, Elvis’ abnormally high vocals simply do not work for me. This isn’t Elvis at his best, but even at this early stage in his career, you can hear the star quality he possesses. Highlights include the classic “Blue Suede Shoes”, the very soft and smooth “I Love You Because” and my personal favourite “Trying To Get To You”.

Really the first rock and roll album, wasn't it? And as such, Album of the Year for 1956

The album that brought rock 'n' roll to the masses, and was probably the record that had the biggest impact on pop culture during the 1950s. Elvis is on great form here with so much energy shown, especially on cuts such as Blue Suede Shoes and Tutti Frutti

Does a good job of showcasing the rock, country and R&B sensibilities of Elvis in less than half an hour.

This is Elvis's best album.

I heard likely to this album the standout tracks are Blue Suede Shoes and Tutti Frutti. Im happy to have this good stuff of music. It is historically important.

Your feedback for Elvis Presley