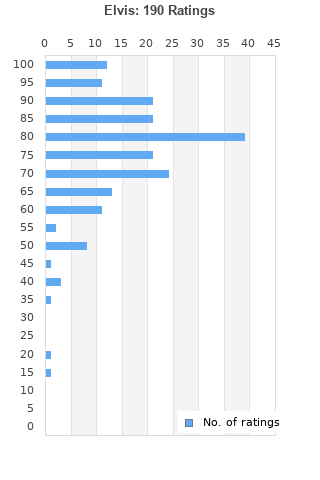 Elvis is ranked 3rd best out of 140 albums by Elvis Presley on BestEverAlbums.com.

The best album by Elvis Presley is Elvis Presley which is ranked number 372 in the list of all-time albums with a total rank score of 5,115. 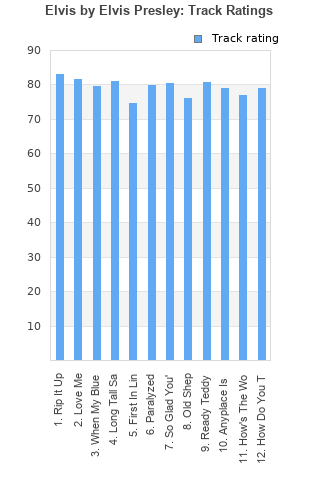 Rating metrics: Outliers can be removed when calculating a mean average to dampen the effects of ratings outside the normal distribution. This figure is provided as the trimmed mean. A high standard deviation can be legitimate, but can sometimes indicate 'gaming' is occurring. Consider a simplified example* of an item receiving ratings of 100, 50, & 0. The mean average rating would be 50. However, ratings of 55, 50 & 45 could also result in the same average. The second average might be more trusted because there is more consensus around a particular rating (a lower deviation).
(*In practice, some albums can have several thousand ratings)
This album is rated in the top 5% of all albums on BestEverAlbums.com. This album has a Bayesian average rating of 77.1/100, a mean average of 76.6/100, and a trimmed mean (excluding outliers) of 77.3/100. The standard deviation for this album is 14.9.

Elvis Presley's second album is obviously nowhere near as significant or important as his first, but it is a more consistent record. Some great rock'n'roll classics sung with gusto serve to make this a thoroughly enjoyable album. Elvis at his early best.

Released the same year as his higher ranked album... feels a bit like a b-sides album/rejects from recording the other album. Still alright, but rightfully not as highly ranked.

You can really hear the early energy of a young Elvis. This explains why he remains a cultural icon.

I can't seem to find this anywhere. :S

Your feedback for Elvis