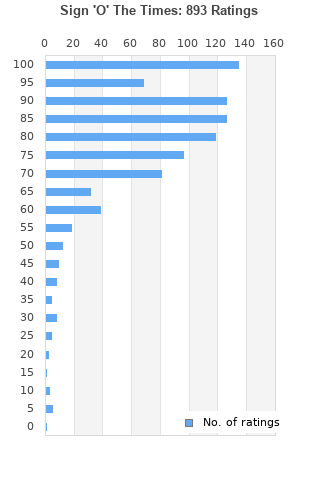 Sign 'O' The Times is ranked as the best album by Prince. 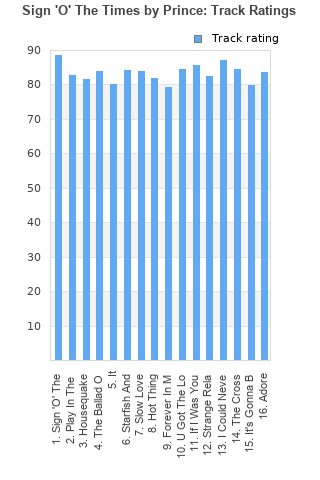 I Could Never Take The Place Of Your Man
Rating: 87 (171 votes)Comments:

Rating metrics: Outliers can be removed when calculating a mean average to dampen the effects of ratings outside the normal distribution. This figure is provided as the trimmed mean. A high standard deviation can be legitimate, but can sometimes indicate 'gaming' is occurring. Consider a simplified example* of an item receiving ratings of 100, 50, & 0. The mean average rating would be 50. However, ratings of 55, 50 & 45 could also result in the same average. The second average might be more trusted because there is more consensus around a particular rating (a lower deviation).
(*In practice, some albums can have several thousand ratings)
This album is rated in the top 1% of all albums on BestEverAlbums.com. This album has a Bayesian average rating of 81.0/100, a mean average of 79.9/100, and a trimmed mean (excluding outliers) of 81.1/100. The standard deviation for this album is 17.2.

It's hard to overstate what a towering creative achievement Sign "O" The Times is. As much as I enjoy Purple Rain, and even though I have it ranked higher, in some ways this might be the better album. It never comes close to settling into complacency or formula, and because Prince was already a megastar when the album was made, he really had nothing to prove in order to garner attention or success. "Starfish and Coffee," Prince's profile of an odd elementary school classmate, is both great storytelling and exceptional melody making, and although few would consider it among Prince's signature songs, it's the highlight of this terrific album as far as I'm concerned.

My Favorite Album by Prince, he becomes a genius here

This is one of THE BEST albums of all time!!! SOOOO FUNKY!

Sign 'O' the Times is Prince's magnum opus. He put so many flavors into this album and it's somehow not a jumbled mess.

Shoutout to 'It'. The best fucking thing he ever made. The pure angst and thirst he displays pierces through your soul; he sounds like he's rolling around in his own sweat trying to get up, and that's a compliment. It should be called 'Id', but it probably already is; I don't suppose that coincidence went over his head. And he uses the "far off" effect better than David Bowie did himself.

Why are some people here comparing Prince with Michael Jackson?

Prince was an amazing artist who made outstanding music.

Jackson's music's kinda one size fits all; music for people that aren't really into music.