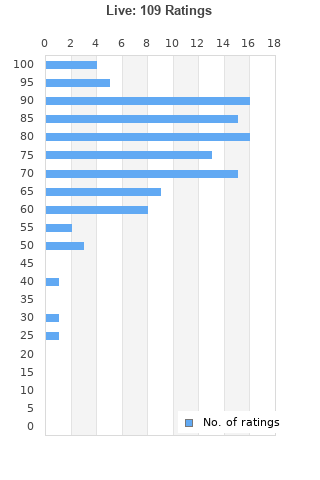 Live is ranked 16th best out of 33 albums by Genesis on BestEverAlbums.com. 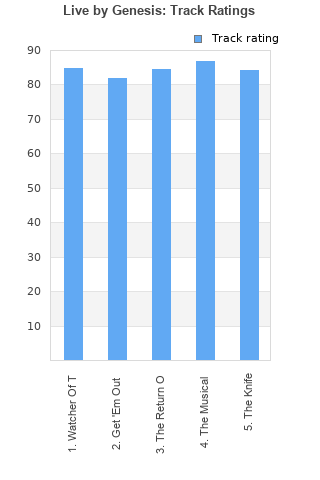 Rating metrics: Outliers can be removed when calculating a mean average to dampen the effects of ratings outside the normal distribution. This figure is provided as the trimmed mean. A high standard deviation can be legitimate, but can sometimes indicate 'gaming' is occurring. Consider a simplified example* of an item receiving ratings of 100, 50, & 0. The mean average rating would be 50. However, ratings of 55, 50 & 45 could also result in the same average. The second average might be more trusted because there is more consensus around a particular rating (a lower deviation).
(*In practice, some albums can have several thousand ratings)
This album is rated in the top 5% of all albums on BestEverAlbums.com. This album has a Bayesian average rating of 76.8/100, a mean average of 76.7/100, and a trimmed mean (excluding outliers) of 77.2/100. The standard deviation for this album is 13.3.

The first taste of Genesis live! It's short, but sweet.

A good live record. The only fault I have is the recording is bit murky.

I'm not necessarily a big fan of the Peter Gabriel Genesis. So I like this live document as a good compilation of their strengths from that era. I like it better than any of their studio albums with Gabriel at the helm.

A fantastic live document of the Gabriel era. The 2007 version adds part of the Lamb show in LA from 1975.

awesome display of genesis live featuring some of their best tracks.