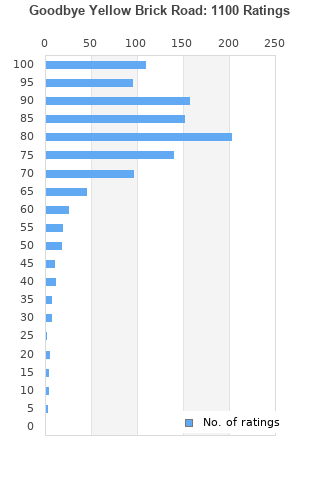 Goodbye Yellow Brick Road is ranked as the best album by Elton John. 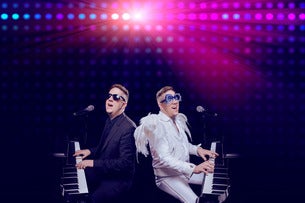 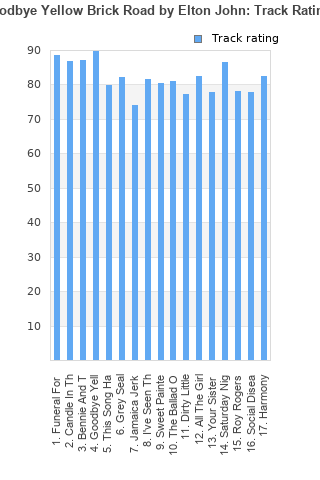 Rating metrics: Outliers can be removed when calculating a mean average to dampen the effects of ratings outside the normal distribution. This figure is provided as the trimmed mean. A high standard deviation can be legitimate, but can sometimes indicate 'gaming' is occurring. Consider a simplified example* of an item receiving ratings of 100, 50, & 0. The mean average rating would be 50. However, ratings of 55, 50 & 45 could also result in the same average. The second average might be more trusted because there is more consensus around a particular rating (a lower deviation).
(*In practice, some albums can have several thousand ratings)
This album is rated in the top 1% of all albums on BestEverAlbums.com. This album has a Bayesian average rating of 80.7/100, a mean average of 79.8/100, and a trimmed mean (excluding outliers) of 80.8/100. The standard deviation for this album is 15.3.

This is not a perfect album but it is close enough that I have no issues saying it has to be one of the greatest of all time.

Magnificent singing, the best Elton album and his top songs are on here as well: Goodbye Yellow Brick Road and Candle In The Wind that are ones of thebest ever made, but 90% of the album is great. I can only complain about Jamaica Jerk-Off and Social Disease, they're not good.

Some nitpickers may say the as a single album this could have been even more cohesive and even better as a whole.
Unnecessary afterthoughts, basically most of us are very glad that this was made like this.
The overall production values are top-notch, this album sounds great and the musicians are top class.,

rambling genre-crossing the odd classic mixed in quite a few. double album pop

I know taste is subjective and all but, this album being below 7 Radiohead albums just shows how absurd this website is lol

I listened to a lot of Elton John as a kid, as we had one Elton John LP (not this one) that I listened to on my record player over and over again. Then, for a while, I sort of forgot about Elton John, maybe because he wasn't quite cool enough or edgy enough for my late adolescent tastes. As I go back through his catalog, however, I am struck by how much more Elton John's sound is "rock" as opposed to "pop." Sure, he spends a lot of his time sitting at the piano, but it's much more in the vain of Little Richard than, say, Michael Bolton. There are a number of Elton John's hits here, out of which my favorite is "Saturday Night's Alright for Fighting," one of the great throwback rock and roll songs of the early seventies.

A masterpiece of pop. A megastar at his peak. I read once that during the period between 71-75, Elton could have written an epic pop songs using the words from the back of a cereal box. Possibly true, but he had the hall of fame lyricist Bernie Taupin...so, you get this...

Not a massive fan of Elton John but I do love this album from start to finish. Nice variety right through.

One of the greatest albums of all time. I'm not sure many will agree, but I don't think there's a single song of filler here. Yes, I even like Jamaica Jerk-Off. The fact that Elton was able to fill two records full of music with his best work is an accomplishment that shouldn't be ignored. Having it ranked as the 234th-best album of all-time is about 200 spots too low.