Let's Get It On (album) by Marvin Gaye 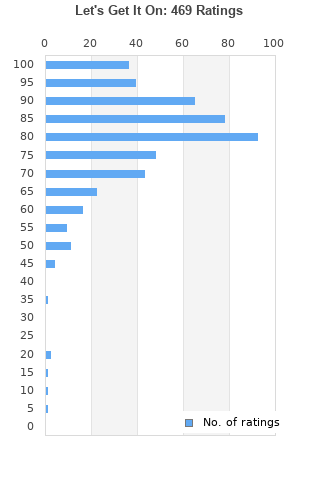 Let's Get It On is ranked 2nd best out of 35 albums by Marvin Gaye on BestEverAlbums.com.

The best album by Marvin Gaye is What's Going On which is ranked number 70 in the list of all-time albums with a total rank score of 21,144. 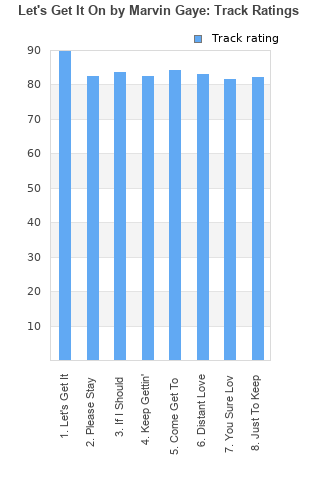 Let's Get It On rankings

Let's Get It On collection

Let's Get It On ratings

Outliers can be removed when calculating a mean average to dampen the effects of ratings outside the normal distribution. This figure is provided as the trimmed mean. A high standard deviation can be legitimate, but can sometimes indicate 'gaming' is occurring. Consider a simplified example* of an item receiving ratings of 100, 50, & 0. The mean average rating would be 50. However, ratings of 55, 50 & 45 could also result in the same average. The second average might be more trusted because there is more consensus around a particular rating (a lower deviation).
(*In practice, some albums can have several thousand ratings)
This album is rated in the top 1% of albums on BestEverAlbums.com. This album has a mean average rating of 81.0/100. The trimmed mean (excluding outliers) is 81.2/100. The standard deviation for this album is 13.7.

Let's Get It On favourites

Let's Get It On comments

Showing latest 10 comments | Show all 16 comments | Most Helpful First | Newest First
(Only showing comments with -2 votes or higher. You can alter this threshold from your profile page. Manage Profile)

This is actually my favourite Marvin album. Sexy and cool as fuck.

A severely underrated album. "Please Stay" an extremely underrated song. So much soul here. Marvin's voice was unlike any other and the funk brothers could lay it down.

One of the sexiest albums ever made. Marvin Gaye's, let's get it on, is the ultimate late night, lights dimmed LP's. Great songs including the absolutely stunning title track, surely one of Gaye's greatest ever songs. Elsewhere, there's other strong songs in, please stay, if I should die tonight, and, you sure love to ball. Obviously, the complete opposite to the classic, what's going on, but that's probably the whole point. Brilliant.

Worked again. Just got it on with my lady with this spinning. Never fails.

Hahaha... I had no idea there's was a Gettin' it on part 2... came back for seconds? That song, regardless of it's content is a soul masterpiece.

This album and "What's Going On" are simply fabulous... It hardly gets any better.... NOTE: If you're a big fan of Marvin and these two albums, I highly recommend getting the 2001 two-CD deluxe versions of both.... "Let's Get..." deluxe has many excellent alt. versions and interesting demos, and the 2nd disc to 2001 deluxe "What's Going On" is pure gold... the best live performance I've ever heard from Marvin where he does pretty much the whole album live with innovative, super groovy alterations.... It was the first live show he'd done in two years, since the death of Tammi Terrell...performed in his hometown at the Kennedy Center, in Washington, DC.... There are other multi-disc reissues that don't have this fantastic concert, so make sure it's the 2001 reissue.... a must have for a fan of Marvin in his prime.....

This is my favourite M. Gaye album, over the years I have managed to collect nearly everything he recorded from 1960 onwards. What's Going On is also great but this album flows so smoothly it is all about different aspects of Love & the art of making love. Let's get It On, Keep Gettin' It On & Come Get To This are amazing as is the whole album. The Deluxe 2 disc edition is a must for all fans of this album.

I would recommend this to anyone who loves great music, good meaningful lyrics that you can understand not to mention love Marvin.

Yes, this is perhaps the sexiest and most romantic record ever made. As a single guy who isn't a ladies man by any stretch of the imagination, it can be kinda strange to think how much I empathize with this record. The first half in particular is flawless as far as I'm concerned. And as far as "Greatest Songs of All Times" arguments go, well you will hear me pushing the title track forward in consideration. Just listen to that track closely again, everything about it - the horns, keyboards, the vocals, the harmonies, the sexy guitar and especially those fucking drums (the greatest drumming I've ever heard) is just perfection!

That level of excellence is nearly matched throughout, albeit in different ways. The slow burnin' shit on here is just about the most sizzlin' stuff ever recorded. (Example; "You Sure Love To Ball".) And the pure romantic stuff here is incredible too! (Example; "If I should Die Tonight" - perhaps one of the best love songs and most overlooked in Gaye's career.)

"There's nothin wrong
with me
Lovin' you
(Honey no nooooo)
And givin' yourself to me
can never be wrong
If the love is true."

Let's Get It On: Tribute To Marvin Gaye
Cannery Hotel and Casino, Las Vegas, United States.

Your feedback for Let's Get It On