Band On The Run (studio album) by Paul McCartney & Wings 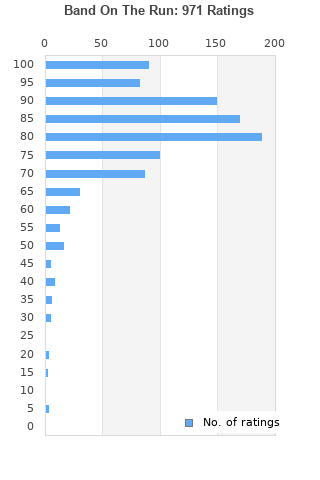 Band On The Run is ranked as the best album by Paul McCartney & Wings. 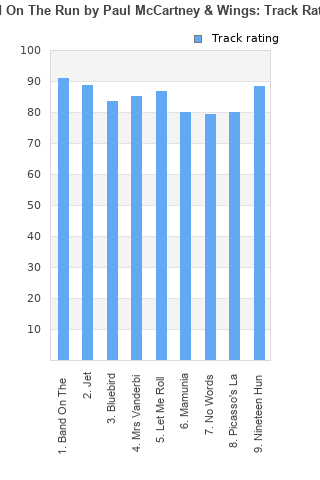 Band On The Run rankings

Band On The Run collection

Band On The Run ratings

Rating metrics: Outliers can be removed when calculating a mean average to dampen the effects of ratings outside the normal distribution. This figure is provided as the trimmed mean. A high standard deviation can be legitimate, but can sometimes indicate 'gaming' is occurring. Consider a simplified example* of an item receiving ratings of 100, 50, & 0. The mean average rating would be 50. However, ratings of 55, 50 & 45 could also result in the same average. The second average might be more trusted because there is more consensus around a particular rating (a lower deviation).
(*In practice, some albums can have several thousand ratings)
This album is rated in the top 1% of all albums on BestEverAlbums.com. This album has a Bayesian average rating of 81.7/100, a mean average of 80.9/100, and a trimmed mean (excluding outliers) of 81.8/100. The standard deviation for this album is 14.0.

Band On The Run favourites

Band On The Run comments

Very good album for after-Beatles McCartney, title track is just awesome and there is a lot of other highlights here, not one reaaly bad track.

This is definitely Pauls best solo album. It is jampacked
with great tunes. Pauls singing and songwriting is in
top form. I like to think of Paul as the Mozart of R&R.

McCartney would struggle to keep up with his peers on the next following albums, but Band on the Run really hits the nail on the head in a couple places, especially on the title track. I don't think it beats out Ram in terms of impact and importance.

What a homerun of a record. This is definitely the moment where making fun of Wings became dumb.
1985 still slaps more than it has any right to. The singles are absolute bangers.
And the lesser known tracks are all easy hidden gems specially No Words

One of the best records by a former Beatle. Band on the Run was the first record that Paul McCartney started to get some critical acclaim for his new band Wings. Several songs on this album are among his best post-Beatles tracks. Among the highlights are the popular title track, the high energy rocker and Let Me Roll It, which was later considered to a bit of a tribute to Macca's old songwriting partner John Lennon. The final track Nineteen Hundred and Eighty Five is a a bit of a lesser known song but one of the most catchy and enjoyable on the record.

This is a great album. "Band on the Run" the title track is an outstanding piece of work; the song is easily the best thing Paul ever did either solo or with Wings with "Maybe I'm Amazed" and "Uncle Albert/Admiral Halsey" competing for second. However, the other tracks all range from decent to great as well. "Jet" is an awesome piece of power pop goodness. "Bluebird" has a catchy chorus. "Let Me Roll It" is a sexy and sensual song that evokes McCartney's old pal Lennon. "Nineteen Hundred Eighty Five" is a fantastic closer. The only real dud on this album is "Picasso's Last Words (Drink to Me)" which is unfournate because it's the longest track on the album.

It's not included on the UK version, but the US "Helen Wheels" is a solid track as well.

In my opinion, this is Paul's best album. It's only competition is Ram.

Best album by any ex Beatle post Beatles. Lot of great songs beside the title track.

Your feedback for Band On The Run