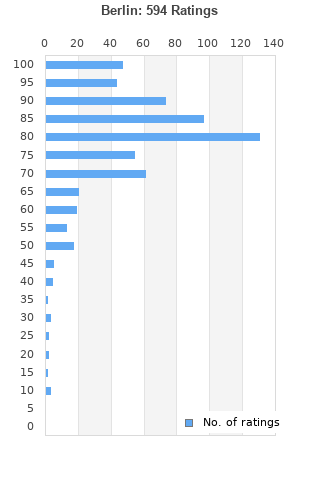 Berlin is ranked 2nd best out of 36 albums by Lou Reed on BestEverAlbums.com.

The best album by Lou Reed is Transformer which is ranked number 131 in the list of all-time albums with a total rank score of 12,909. 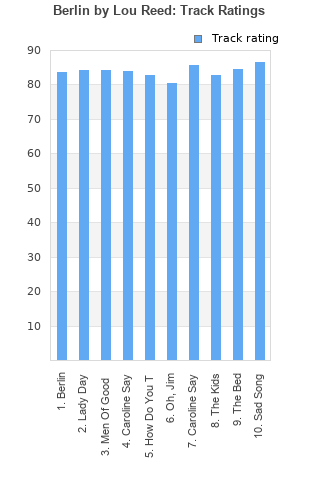 Rating metrics: Outliers can be removed when calculating a mean average to dampen the effects of ratings outside the normal distribution. This figure is provided as the trimmed mean. A high standard deviation can be legitimate, but can sometimes indicate 'gaming' is occurring. Consider a simplified example* of an item receiving ratings of 100, 50, & 0. The mean average rating would be 50. However, ratings of 55, 50 & 45 could also result in the same average. The second average might be more trusted because there is more consensus around a particular rating (a lower deviation).
(*In practice, some albums can have several thousand ratings)
This album is rated in the top 2% of all albums on BestEverAlbums.com. This album has a Bayesian average rating of 80.2/100, a mean average of 79.2/100, and a trimmed mean (excluding outliers) of 80.3/100. The standard deviation for this album is 14.9.

Not half as good as Transformer, but has some really good tracks like both parts of Caroline Says.

The story Caroline and Jim is as enchanting as it is harrowing , the frustration in Reeds voice at the end of the ‘ The kids ‘ makes it feel really vivid , love this album .

Lou Reed comes through with another classic. Berlin sounds like Lou's response to Ziggy Stardust. The songwriting is of course near perfect because it's Lou Reed, the performances are great, and the lyrics are on point. I think this might be tied with Transformer in his solo discography.

Lou Reeds 3rd solo album 'Berlin' is essentially a rock opera that tells the sad tale of Jim and Caroline. The albums themes of drug use, prostitution, depression, domestic violence and suicide make for a harrowing listen but one that is weirdly intoxicating

Centre piece track "The Kids" is one the 70's great tracks , the children crying and "Mummy Mummy " screams that close the track still gives me chills even after all these years

My only nit picking would be track 9 "The Bed" and I'll often skip past it , still , this is my favourite LR album

Artistically speaking, one of the greatest albums ever conceived, written, and played. Aynsley Dunbar's drumming on Side A is some of the greatest ever put on record, and the songs on Side B are so beautifully, disturbingly depressing that you can't help but be in awe. That said, I couldn't listen to this too frequently or I'd probably lose my mind.

I may be in the minority here, but I will not hesitate to state that I believe that Berlin is Reed’s masterpiece. I like Transformer, in fact, Transformer is much easier to dip into when you don’t feel like listening to a full album, but as a whole, Berlin is worlds better than Transformer.

The opening track ‘Berlin’ is a beautiful song and, in my mind, a perfect opener. Next we have ‘Lady Day’, a fine track that works very well as an in-between before the next brilliant song, the same goes for the next track ‘Men of Good Fortune’ which is possibly the weakest track, but that is saying something, as the song is actually still very good.

Then we have the albums next classic, ‘Caroline Says I’ which, as with all Lou Reed/Velvet Underground tracks with ‘says’ in the title, is absolutely brilliant. Then we have two more songs that further the story of the album ‘How it Feels’ and ‘Oh, Jim’, both great, before my favourite track. ‘Caroline Says II’ which I love so much I’m going to write a paragraph about it.

‘Caroline Says II’ is a slightly reworked version of an (at that point) unreleased Velvet Underground song called ‘Stephanie Says’. ‘Stephanie Says’ is a beautiful song and is, in my opinion, one of the Velvet’s best, so Reed takes this almost perfect song and polishes it up, making it part of something much bigger, this is really an amazing effort.

The next two tracks ‘The Kids’ and ‘The Bed’ are dark, depressing and effective, leading up to the finale, ‘Sad Song’ which is a lovely melancholic closer. Overall, this album is Lou’s best, and is a must listen for any Velvet Underground fan, any Lou Reed fan and, really, any music fan.

Man this is an excellent album. The second side is very dark but they are still great tunes, lyric and storyline. I also love side one which is less sombre but the whole album is superb with perhaps the Caroline Says 1 the weakest flippant track, but nevertheless still a good song in itself.

Your feedback for Berlin