Houses Of The Holy (studio album) by Led Zeppelin 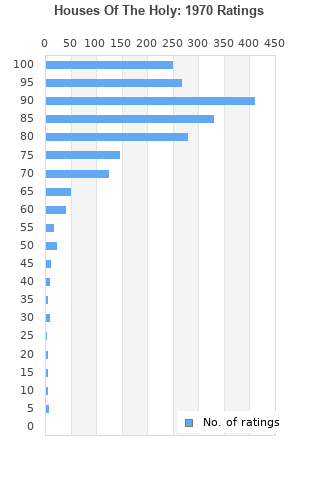 Houses Of The Holy is ranked 4th best out of 22 albums by Led Zeppelin on BestEverAlbums.com.

The best album by Led Zeppelin is Untitled (Led Zeppelin IV) which is ranked number 11 in the list of all-time albums with a total rank score of 53,393. 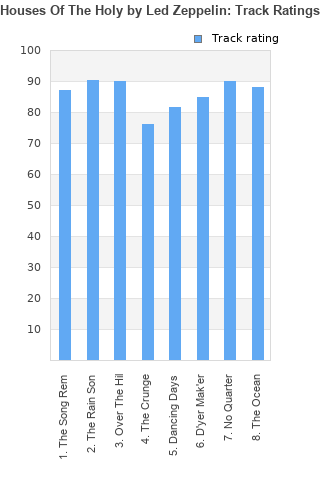 Houses Of The Holy rankings

Houses Of The Holy collection

Houses Of The Holy ratings

Rating metrics: Outliers can be removed when calculating a mean average to dampen the effects of ratings outside the normal distribution. This figure is provided as the trimmed mean. A high standard deviation can be legitimate, but can sometimes indicate 'gaming' is occurring. Consider a simplified example* of an item receiving ratings of 100, 50, & 0. The mean average rating would be 50. However, ratings of 55, 50 & 45 could also result in the same average. The second average might be more trusted because there is more consensus around a particular rating (a lower deviation).
(*In practice, some albums can have several thousand ratings)
This album is rated in the top 1% of all albums on BestEverAlbums.com. This album has a Bayesian average rating of 85.0/100, a mean average of 84.1/100, and a trimmed mean (excluding outliers) of 85.0/100. The standard deviation for this album is 13.6.

Houses Of The Holy favourites

Houses Of The Holy comments

A more experimental and risky release from Led Zeppelin but I really think that it pays off. Songs like D'yer Mak'er, The Song Remains The Same and Over The Hills And Far Away still sound fresh today and they all have some fantastic instrumentals on there. The guitar work from Jimmy Page is fantastic the whole way through and it elevates songs that are already great into truly phenomenal cuts. Alongside this, you have some amazing performances from John Bonham and John Paul Jones on bass and guitar which all blend together to create some intelligent and very enjoyable hard rock. Also, Robert Plants vocal is obviously stunning and as gritty and rough as ever. However, what holds this album back for me is the couple of songs which are just decent. These songs are Dancing Days and The Crunge with the latter being dangerously close to being pretty poor. Without these two songs I do think the record is better. Overall, this release is great but a few factors keep it from reaching its true potential.

suuuperb album, very nearly my favorite Zep LP - snip off the (slightly) weaker tracks (my candidates would be D'yer Mak'er or/and The Crunge) and replace with The Rover and Houses of the Holy and it would place it in my top 3 of all time ... songs were recorded at same sessions and appeared later on Physical Graffiti..

What is noticeable in this album is the colourful nature that emerges in all of the tracks. It is fun, experimental but still manages not to sound forced or like a flash in the pan fad. Tracks on this album stand amongst the band's best and changing the formula somewhat reaped huge rewards.

This album is very impressive and great at its best and very underwhelming at its worst, but I can't say that it is a mixed bag, because it is still a great Led Zeppelin album that I love. The Ocean, No Quarter, Over The Hills are my personal favorites and The Rain Song and Song Remains The Same are very good quality too. The only problem I have with it is that The Crunge and Dy'er Mak'er are bad in my opinion so I can't give it anything higher than 95.

More brilliance. Not a fan of The Crunge or the last track, but there is some great stuff here. D'yer Maker is a lot different to most of the album, but it still works. No Quarter is incredible, surely one of their best. That guitar riff is insanely good. Very easy to play but very difficult to make it sound as good as Page makes it sound. Over The Hills And Far Away is great too.

The album is well balanced. It starts brilliantly and gets better with The Rain Song, a very strong piece. Over The Hills is typical of the band. No Quarter is another highlight.

I do not know why this, and a lot of other Led Zeppelin albums are placed above Physical Graffiti.

Your feedback for Houses Of The Holy