Raw Power (studio album) by Iggy And The Stooges 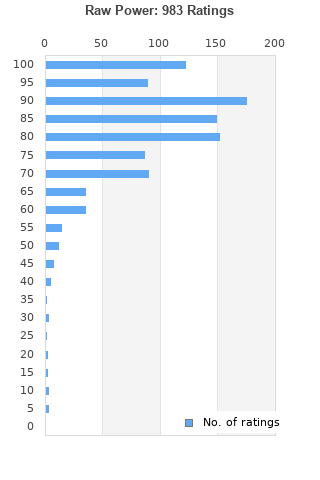 Iggy and The Stooges: Raw Power Live: In The Hands Of The Fans [DVD] [2011]
Condition: Brand New
Time left: 16h 53m 10s
Ships to: Worldwide
$28.65
Go to store
Product prices and availability are accurate as of the date indicated and are subject to change. Any price and availability information displayed on the linked website at the time of purchase will apply to the purchase of this product.  See full search results on eBay

Iggy And The Stooges bestography

Raw Power is ranked as the best album by Iggy And The Stooges. 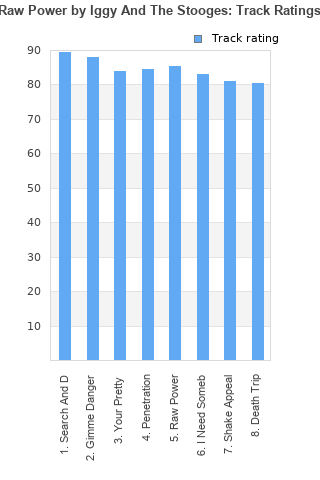 Rating metrics: Outliers can be removed when calculating a mean average to dampen the effects of ratings outside the normal distribution. This figure is provided as the trimmed mean. A high standard deviation can be legitimate, but can sometimes indicate 'gaming' is occurring. Consider a simplified example* of an item receiving ratings of 100, 50, & 0. The mean average rating would be 50. However, ratings of 55, 50 & 45 could also result in the same average. The second average might be more trusted because there is more consensus around a particular rating (a lower deviation).
(*In practice, some albums can have several thousand ratings)
This album is rated in the top 1% of all albums on BestEverAlbums.com. This album has a Bayesian average rating of 82.8/100, a mean average of 82.2/100, and a trimmed mean (excluding outliers) of 82.9/100. The standard deviation for this album is 14.1.

The album's title is self-explanatory.

Album title is appropo for this album. Love the noisy production of the guitars, and Iggy's screaming vocals. Amazing, AMAZING album!

The album that probably popularized the distinctive punk/new wave beat. You know, that beat that literally every ‘80s song has (and hipster ‘00s indie rockers). It is on almost every track and it gets you GOING.
The atmosphere is messy as always, guitars distortedto the max, and if you have few enough brain cells, you’ll mistake that for “horrendous production” HAHAHAHA

You can't treat Raw Power like other albums. It doesn't work unless you're playing it loud enough to wake the deceased.

More to the point, you shouldn't listen to it on anything even slightly resembling high-end audio equipment. It needs to be played on the trashiest, crappiest sound system you can find. Think stock speakers on a Peugeot 205 - playing it through the cassette deck of course - and you're on the right track.

This isn't just proto-punk. It transcends all categorization. It's nothing more than pure, unfiltered, unlimited sound energy. And f*cking hell is it good.

My friend had put the Stooges on my iPod when I had no idea how to put music on it. She put Search and Destroy. At first listen, I would skip it. But one day I decided to let it play and I really got into it. Once I had listened to all other punk bands like Sex Pistols, Black Flag, and Dead Kennedys, I revisited The Stooges and specifically Raw Power. I loved it. The raw, gritty production, the loudness, and the high energy made me addicted to the record. This is what true garage rock sounds like!! Perfect record!

This website clearly doesn't give the stooges enough credit. I mean this album should at least be in the top 100, along with funhouse.

Your feedback for Raw Power