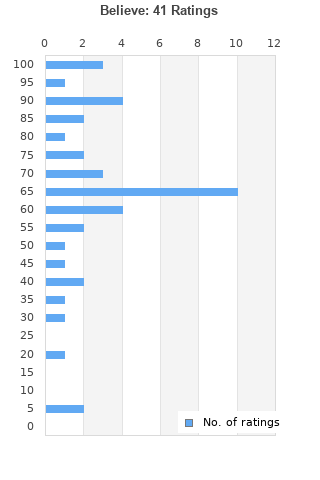 Believe is ranked 2nd best out of 31 albums by Cher on BestEverAlbums.com.

The best album by Cher is Heart Of Stone which is ranked number 4957 in the list of all-time albums with a total rank score of 268. 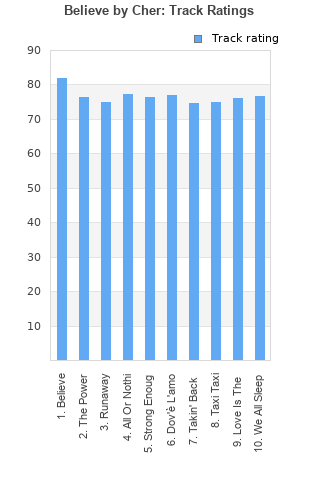 Rating metrics: Outliers can be removed when calculating a mean average to dampen the effects of ratings outside the normal distribution. This figure is provided as the trimmed mean. A high standard deviation can be legitimate, but can sometimes indicate 'gaming' is occurring. Consider a simplified example* of an item receiving ratings of 100, 50, & 0. The mean average rating would be 50. However, ratings of 55, 50 & 45 could also result in the same average. The second average might be more trusted because there is more consensus around a particular rating (a lower deviation).
(*In practice, some albums can have several thousand ratings)
This album has a Bayesian average rating of 62.5/100, a mean average of 58.8/100, and a trimmed mean (excluding outliers) of 58.8/100. The standard deviation for this album is 23.3.

This is no way her best album but at time of writing this, that is where it is placed. Her 70's albums are better and Love Hurts is a better album.

JMan just because someone doesn't like an album you like doesn't mean they didn't listen to it and you are not objectively right thinking that.

Regarding my first statement, listening to music may be some kind of a school, but I still keep my opinion of Believe.

Many people here only listen to one song and then rate the whole album. Don't believe these ratings.

I'm being extremely kind with this rating.

A friend of mine said this to me, and I highly agree with this statement.

"Some persons only think Cher is bad because Cher is widely believed by hardcore music fans as "campy", mostly due to her public image, with the cosmetic surgery she has done all these years and stuff, but also because her music was always very pop-oriented but in a simplistic way which followed certain trends, not like, say, Human League, who defined the '80s by making synth-pop the hottest thing around, and therefore having an identity of their own."

People make listening to music out to be some BIG SCHOOL, when really that "school" is just an unknown way for people to like the same thing and have no free will of their own.

I like Cher, and I don't care who else does. I'm not afraid to state my opinion. And this album is Cher's best work. At least the first half is.

Your feedback for Believe