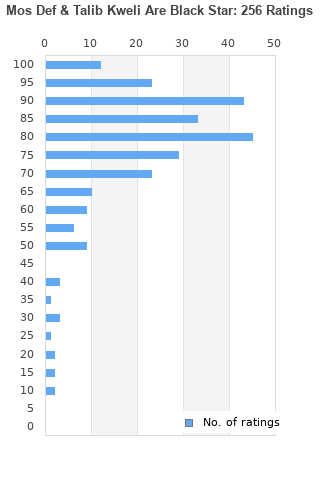 Mos Def & Talib Kweli Are Black Star is ranked as the best album by Black Star. 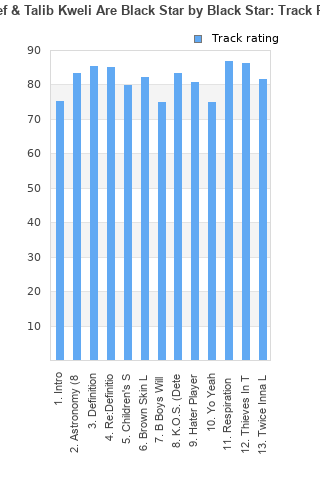 Thieves In The Night
Rating: 86 (56 votes)Comments:

Rating metrics: Outliers can be removed when calculating a mean average to dampen the effects of ratings outside the normal distribution. This figure is provided as the trimmed mean. A high standard deviation can be legitimate, but can sometimes indicate 'gaming' is occurring. Consider a simplified example* of an item receiving ratings of 100, 50, & 0. The mean average rating would be 50. However, ratings of 55, 50 & 45 could also result in the same average. The second average might be more trusted because there is more consensus around a particular rating (a lower deviation).
(*In practice, some albums can have several thousand ratings)
This album is rated in the top 2% of all albums on BestEverAlbums.com. This album has a Bayesian average rating of 78.9/100, a mean average of 77.6/100, and a trimmed mean (excluding outliers) of 79.1/100. The standard deviation for this album is 16.9.

Not a big rap fan but I love this album. My favorite rap/hip-hop album.

Listening to Black Star - Mos Def & Talib Kweli Are Black Star just a few days after listening to Mos Def - Black On Both Sides was definitely an interesting experience. Many similarities between them - yeah, who would have thought- this one feels better suited to casual listening, while the other one is a bit heavier, a bit more powerful. It sounds so 90's - don't mean that in a negative way, it perfectly captures the atmosphere of its era, a solid jazz based background, some soul elements, some reggae even. When it comes to lyrics, there are also many similarities, Astronomy (8th Light) shows the way, as it already begins to explore "black" themes that run through the whole album ("Black, my family thick like that-strap molasses Star on the rise, in the eyes of the masses Black is the color of my true love's hair Stars are bright, shining, hot balls of air Black like my baby girl's stare Black like the veil that the Muslimina wear Black like the planet that they fear, why they scared? Black like the slave ship belly that brought us here Black like the cheeks that are roadways for tears (Mm) That leave black faces well traveled with years Black like assassin crosshairs Blacker than my granddaddy armchair He never really got no time to chill there 'Cause this life is warfare, warfare"). The Definition - Re:definition concept was a cool touch. On the other hand, Brown Skin Lady is the one track I've never managed to get into, actually I consider skipping it almost every time, but so far I've always resisted temptation. It is followed by B Boys Will B Boys, which I also view as one of the weakest tracks. But then K.O.S. (Determination) signifies a return to form ("At exactly which point do you start to realize That life without knowledge is death in disguise? That's why, knowledge of self is like life after death Apply it, to your life, let destiny manifest"), those female vocals are heavenly. Yo Yeah is another noteworthy addition., short and effective, it makes a point. Then comes the back to back combo of Respiration("We New York, the narcotics Draped in metal and fiber optics Where mercenaries is paid to trade hot stock tips for profits Thirsty criminals pick pockets Hard knuckles on the second hands of working-class watches Skyscrapers is colossus, the cost of living is preposterous Stay alive, you pay or die, no options No Batman and Robin Can't tell between the cops and the robbers") and Thieves In The Night (""Give me the fortune, keep the fame" said my man Louis I agreed, know what he mean because we live the truest lie I asked him why we follow the law of the bluest eye He looked at me, he thought about it, was like, "I'm clueless, why?" The question was rhetorical, the answer is horrible Our morals are out of place and got our lives full of sorrow And so tomorrow coming later than usual Waiting on someone to pity us While we find the beauty in the hideous They say money's the root of all evil, but I can't tell You know what I mean, pesos, francs, yens, cowrie shells Dollar bills, or is it the mindstate that's ill?"), the best part of the album. What really makes this album stand out, however, is the chemistry between Mos Def and Talib Kweli. If I had to pick, Mos Def's style is more relatable and closer to my liking, but it's one of those cases where the old cliche "the whole is greater than the sum of its parts" does hold true and when the parts are so good individually, you know you have to do with something so very special.

Takes more listens. This is Alternative Hip Hop after all. There's more to it than you initially think. Sure it's not perfect but it's definitely deserving of recognition.

Mos Def and Talib Kweli were respectively in their prhyme while they dropped this album. It has a lot to offer in term of socially conscious lyrics.

Some of the most intellectual lyrics in hip hop. Practically a class on African American studies. Talib Kweli is a great rapper. "Respiration" and "Thieves in the Night are highlights". Musically it's not too interesting.

I agree that they definitely lay down some intelligent lyrics. I prefer albums that mix the beat up a little more, use sampling, and have more DJ work.

Your feedback for Mos Def & Talib Kweli Are Black Star