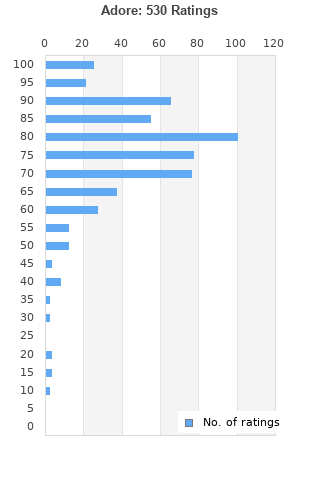 Adore is ranked 3rd best out of 22 albums by The Smashing Pumpkins on BestEverAlbums.com.

The best album by The Smashing Pumpkins is Siamese Dream which is ranked number 54 in the list of all-time albums with a total rank score of 21,815. 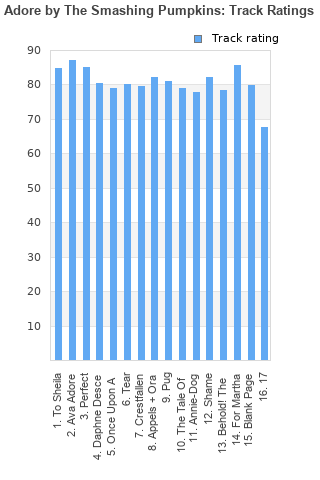 Rating metrics: Outliers can be removed when calculating a mean average to dampen the effects of ratings outside the normal distribution. This figure is provided as the trimmed mean. A high standard deviation can be legitimate, but can sometimes indicate 'gaming' is occurring. Consider a simplified example* of an item receiving ratings of 100, 50, & 0. The mean average rating would be 50. However, ratings of 55, 50 & 45 could also result in the same average. The second average might be more trusted because there is more consensus around a particular rating (a lower deviation).
(*In practice, some albums can have several thousand ratings)
This album is rated in the top 5% of all albums on BestEverAlbums.com. This album has a Bayesian average rating of 76.8/100, a mean average of 75.8/100, and a trimmed mean (excluding outliers) of 76.9/100. The standard deviation for this album is 14.9.

The Pumpkins being sadboys. And doing it very well. Not a fan of every track though.

It’s better than the previous two albums at least.

There are a lot of criticisms regarding this album, such as obvious opportunities to cut some of the worst tracks. "17", "Annie Dog", "A Tale of Dusty and Pistol Pete", "Once Upon a Time", and "Pug" all stand out to me as being less than stellar - if nothing else, they don't improve the album's overall cohesiveness (in my estimation, although I know a lot of you might have differing opinions on this). While Adore is definitely a turning point for The Smashing Pumpkins, in terms of stylist direction, I'm not convinced that Mellon Collie is exempt from experiencing similar problems - "Tales of a Scorched Earth", "Take Me Down", and "Fuck You" are frustratingly obnoxious to me personally, even if they required exceptional talent to perform and produce.

Inconsistencies among the tracks set aside, when I reflect on Adore-period Smashing Pumpkins, instead of "Ava Adore", I actually connect it with vulnerable and meditative pieces like "Crestfallen", "Shame", "Behold!", "To Sheila", and "For Martha". Scaling back the tempo and intensity to "Starlight" and "Farewell and Goodnight" levels from the ending of their prior album two years earlier, and with smart restraint, Corgan and The Smashing Pumpkins find footing in relate-able content involving the struggles that people endure on a daily basis - the fear of being ostracized by your peers (like in "Shame"); resolving the internal grief from suffering a family member's death; or realizing the loss of a romantic partner's requited love as a divide forms and deepens.

While none of the selections on Adore quite exceeded the song-writing quality of "Disarm", "Thru the Eyes of Ruby", or "Porcelina of the Vast Seas", nor exceeded the popularity of "1979" or "Today", their intimacy still resonates with me, even as I've advanced in age into my late 20s. The poetic expressions of acceptance in "To Sheila" caress our ears with vivid imagery, opening us to the option of envisioning a swirling nightscape of beauty and love and connection, to gently-picked strings and loftily aerie vocal acumen, that then tragically crumbles to nothing beyond all control. The narrator professes "you make me real" to Shiela, not with a demanding tone for an audience, but with one of acknowledgment. In an idyllic conception, he evokes the possibility of "bring[ing] [her] the light" and "tak[ing] [her] home into the night", but it doesn't reflect the reality, which is better captured with phrases like "uncertain divine" and "scream into the divide". The maturity of these pastoral verses, by virtue of identifying the duality of ideality versus reality, echoes the desires of people to bring happiness to those they love, but with whom they aren't able to foster a lasting and meaningful relationship for various reasons (such as unrequited love). Similar themes are prevalent throughout the album, with honorable-mention lyricism particularly in "Daphne Descends". And this poetic content has contributed to Adore remaining relevant and aging well into the new millennium.

The album later makes headway into even more funerial exploration, covering what could be described as a multi-song ode to Corgan's mother, which consists an ardent posthumous piano ballade "For Martha" (until it breaks down in spectacular fashion midway through its ambitious 8.5 minute runtime), as well as a less apparent but also impacting sister song "Behold! The Night Mare" which immediately prefaces it. In addition to the word play in which Corgan wails "the night mare rides on!", channeling every fiber of melancholy manageable to the human vocal folds, and evocative of a permanent living nightmare, this piece also makes an important metaphoric statement about how time and experience continue without regard to lost loved ones. Grappling with his mother's death, Corgan agonizes over perpetually prettifying her grave, and helplessly, futilely, and rhetorically wonders how he can find solutions, meaning, and relief in the face of inevitable things in the human experience, like death and separation.

These many forms of introspection make Adore special, and more profound than most critics give it credit. It's possible that The Smashing Pumpkin's departure of their former sound influenced critics' opinions, as much as Corgan's mis-marketing influenced the album's poor sales on the marketplace at the time of its first release. I have to admit, it does suffer from its sprawling length, which might not be fully justified, and it could've benefited with additional song curation. Regardless, it brought us some incredible and moving tracks with fantastic replay value!

Certainly bloated, but I don't buy the criticism that there aren't any standout tracks here. To Sheila, Ava Adore, Perfect is my favorite start to any Pumpkins album, and Appels + Oranjes is possibly the most underrated Pumpkins track ever released. Unfortunately, Adore is the last good Pumpkins album ever released, and you can tell they are slowly starting to run out of ideas.

Some beautiful slow songs are still on here, but overall they’ve lost their spark from this moment. Which I REALLY lament. I’ve returned often to this album hoping it would suddenly click with me, but no.

Definitely a polarizing album. I used to be on the fence about this one.. and after my first few listens I leaned towards not liking it so much and put it on the back burner. Upon seeing them live on their Shiny Oh So Bright Tour, and finding a nice used original copy on vinyl, I gave it a little revisiting.

If you like songs in the vein of Sweet Sweet, Spaceboy, or Cupid, Lily, Beautiful, Farewell... etc. you’d might like this album. I will say the musical direction is obviously different than previous albums, which could be hard to adapt to at first. Some of the effects, production, and drums are a little weird in some places... at least for what I like in The Smashing Pumpkins... really shows how valuable Jimmy Chamberlain was.

With that being said, this album is consistently pretty good with sprinkles of greatness throughout. Not among their best albums, but not worse than some would say, and I definitely don’t hate it by any means. If you’re a SP fan, or maybe more so of Billy Corgan you’ll probably like this album

This wasn't experiment for experiments sake - they binned Jimmy (because of his personal problems) and decided not to replace him with another drummer. I like the fact they did that, almost out of respect because, let's face it the best SP songs are when BC and JC bang it all about. Good on 'em. Still a good album and personally I prefer this to Siamese Dream and Machina, although I do admit it isn't quite the same Jimmy-less.

Now that almost 20 years have passed, we can realize that this a good album. The A side is clearly better than the B side, but the last one has For Martha that is a great tune. The other highlights are the single (Ava Adore), Daphne Descends and perhaps the best one, Tear. What a song!

Your feedback for Adore