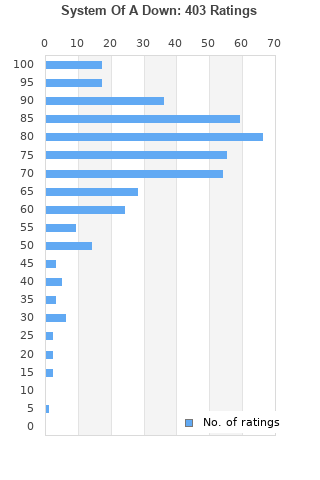 The best album by System Of A Down is Toxicity which is ranked number 297 in the list of all-time albums with a total rank score of 6,364. 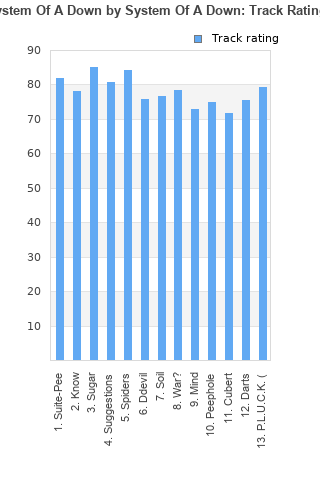 System Of A Down rankings

System Of A Down collection

System Of A Down ratings

Rating metrics: Outliers can be removed when calculating a mean average to dampen the effects of ratings outside the normal distribution. This figure is provided as the trimmed mean. A high standard deviation can be legitimate, but can sometimes indicate 'gaming' is occurring. Consider a simplified example* of an item receiving ratings of 100, 50, & 0. The mean average rating would be 50. However, ratings of 55, 50 & 45 could also result in the same average. The second average might be more trusted because there is more consensus around a particular rating (a lower deviation).
(*In practice, some albums can have several thousand ratings)
This album is rated in the top 12% of all albums on BestEverAlbums.com. This album has a Bayesian average rating of 75.3/100, a mean average of 74.3/100, and a trimmed mean (excluding outliers) of 75.4/100. The standard deviation for this album is 16.0.

System Of A Down favourites

System Of A Down comments

Weirdness and goofiness carries sometimes a long way, but not for me, this time. Raw!

First half is just awesome, the second half drags the album down unfortunately. Spiders is brilliant, and I love Suite-Pee, Know and War too.

Unique as it is heavy!

Their style makes them stand out, but I prefer some of their other albums, this was too loud, too heavy, too aggressive for me. Overall, 55/100.

Not a lot of albums sound much like this. Very raw and aggressive. They had a message to send and sent it. Suite-Pee, Spiders, and Suggestions are some of my favorite SOAD songs.

Really good album, and quite unique in the nu metal world.

I don't actually think SoaD ever topped their bolt-from-the-blue debut, although critics seem to prefer (the actually quite repetitive) "Toxicity".

Your feedback for System Of A Down