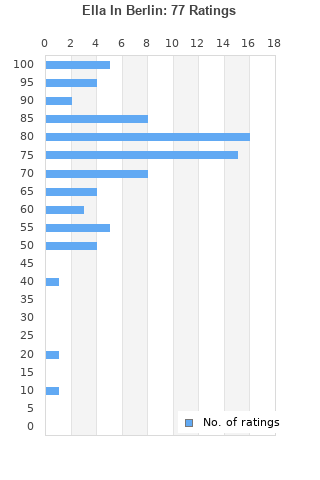 Ella In Berlin is ranked 5th best out of 61 albums by Ella Fitzgerald on BestEverAlbums.com.

The best album by Ella Fitzgerald is Ella Fitzgerald Sings The Cole Porter Song Book which is ranked number 1549 in the list of all-time albums with a total rank score of 1,121. 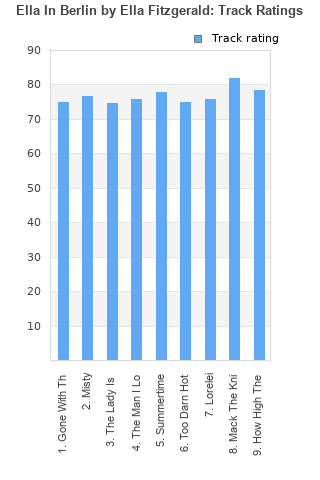 Rating metrics: Outliers can be removed when calculating a mean average to dampen the effects of ratings outside the normal distribution. This figure is provided as the trimmed mean. A high standard deviation can be legitimate, but can sometimes indicate 'gaming' is occurring. Consider a simplified example* of an item receiving ratings of 100, 50, & 0. The mean average rating would be 50. However, ratings of 55, 50 & 45 could also result in the same average. The second average might be more trusted because there is more consensus around a particular rating (a lower deviation).
(*In practice, some albums can have several thousand ratings)
This album is rated in the top 13% of all albums on BestEverAlbums.com. This album has a Bayesian average rating of 75.3/100, a mean average of 73.9/100, and a trimmed mean (excluding outliers) of 75.6/100. The standard deviation for this album is 16.5.

Fitzgerald, from a poor and troubled background, achieved success, despite her tough manner and dishevelled appearance, singing with big bands in the swing era during the 30s, and then as solo vocalist with bepop jazz bands in the 40s when she developed her scat style. In 1956 she began an eight year period of annually releasing an album focusing on songs and composers from the Great American Songbook. Though these albums are highly popular and highly regarded, the live In Berlin is more significant - it is an awesome recording and really shows her at her best. Her ad-libbing and scatting is creative and of a very high order, and her voice is superb, relaxed, confident, and very at ease with the songs she is doing. She is regarded as the "First Lady of Song", and the "Queen of Jazz", and this album really shows why.

A phenomenal live recording by one of the greatest singers of the 20th century. A personal favorite is "Mack the Knife".

The woman was a treasure. She had one of the best voices of her generation and was a class act all the way. This record although not one of her greatest is still pretty darn good.

Any artist should learn from this master on how to improvise if you forget lines. Listen to How High the Moon, but more so Mack the Knife - she never fails to make me smile with this track.

Your feedback for Ella In Berlin