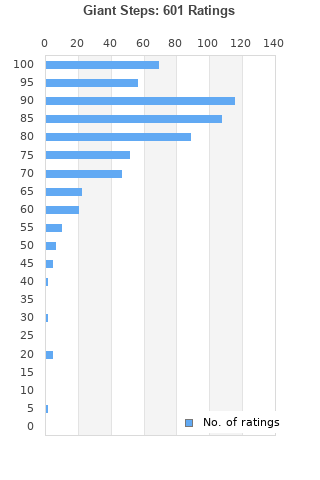 Giant Steps is ranked 3rd best out of 76 albums by John Coltrane on BestEverAlbums.com.

The best album by John Coltrane is A Love Supreme which is ranked number 77 in the list of all-time albums with a total rank score of 18,662. 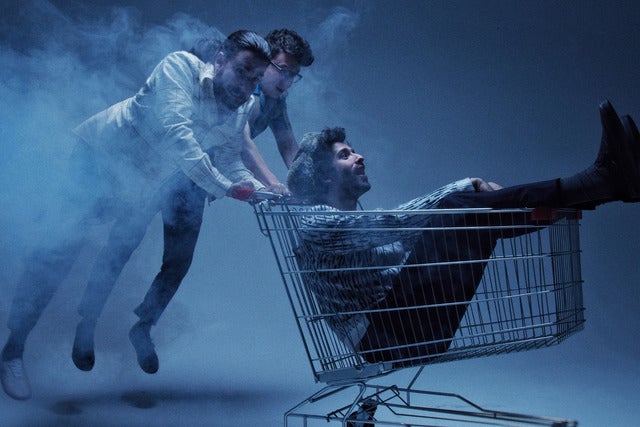 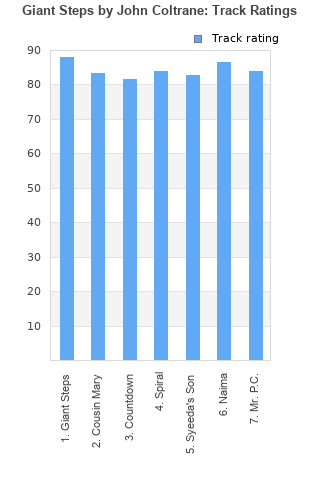 Rating metrics: Outliers can be removed when calculating a mean average to dampen the effects of ratings outside the normal distribution. This figure is provided as the trimmed mean. A high standard deviation can be legitimate, but can sometimes indicate 'gaming' is occurring. Consider a simplified example* of an item receiving ratings of 100, 50, & 0. The mean average rating would be 50. However, ratings of 55, 50 & 45 could also result in the same average. The second average might be more trusted because there is more consensus around a particular rating (a lower deviation).
(*In practice, some albums can have several thousand ratings)
This album is rated in the top 1% of all albums on BestEverAlbums.com. This album has a Bayesian average rating of 82.8/100, a mean average of 82.3/100, and a trimmed mean (excluding outliers) of 83.0/100. The standard deviation for this album is 13.8.

Classic of the classics. The Giant Leaped.

John Coltrane is a beast, as always, but I've always liked to pay attention to the rhythm sections on albums with legendary performers (i.e. Jimi Hendrix Experience and Mitch Mitchell/Noel Redding) and Art Taylor & Paul Chambers are totally able to keep up with him, quite the duo. Not to diminish Coltrane's feats, he was really on a different level on this one.

A good listen. I can appreciate some of the complexity of what's going on, but not enough to understand its elevated position in the jazz canon.

The title track and 'Spiral' are absolute masterpieces. The rest of the tracks are generally pretty great as well. This release often gets overshadowed by Coltrane's iconic album 'A Love Supreme', but this record really stands on it's own as a great piece of work.

Giant Steps wasn't much of a standout to me upon my first listen or two, but in the midst of a bit of a personal Coltrane renaissance, this record is coming out as a brand new work. Even in what could (and really should) be considered a more traditional jazz setting compared to the likes of the superb A Love Supreme, and especially to the boundaryless records like Om or Cosmic Music, we still see Coltrane breaking barriers, and performing with immaculate virtuosity and cleanliness along with a stellar non-classic quartet lineup.

If you're looking for masterful melodicism in crafty jazz music, it is hard to recommend something before Giant Steps, a beautiful piece and one of jazz music's most important albums.

The title track is awesome. The rest is good to really good.

Definitely more vamp and groove based than A Love Supreme, which makes it a more fun listen, but also more impersonal. I’d say they’re equally as good, depending on what you’re in the mood for.

I also have heard “Spiral” before, but who knows where. It’s always fun when you realize you already know something.

Absolutely amazing. I often can't choose between this and A Love Supreme. The changes on this are insane and really took modal jazz to its limits at the time.
Fav tracks: Giant Steps, Naima, Mr PC