A Rainbow In Curved Air (studio album) by Terry Riley 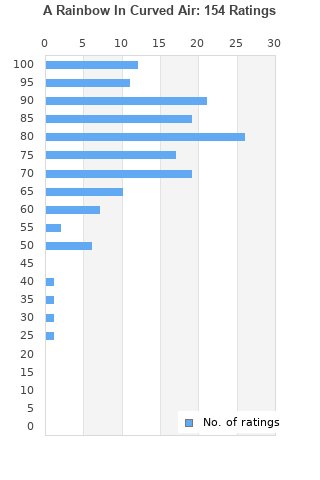 A Rainbow In Curved Air is ranked as the best album by Terry Riley.

Listen to A Rainbow In Curved Air on YouTube 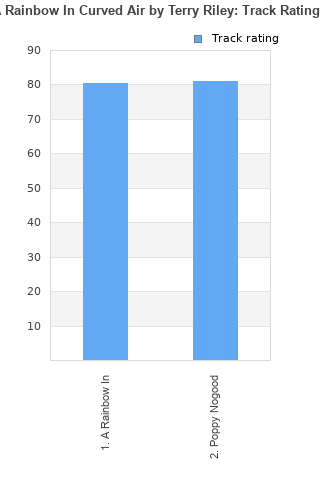 A Rainbow In Curved Air rankings

A Rainbow In Curved Air collection

A Rainbow In Curved Air ratings

Rating metrics: Outliers can be removed when calculating a mean average to dampen the effects of ratings outside the normal distribution. This figure is provided as the trimmed mean. A high standard deviation can be legitimate, but can sometimes indicate 'gaming' is occurring. Consider a simplified example* of an item receiving ratings of 100, 50, & 0. The mean average rating would be 50. However, ratings of 55, 50 & 45 could also result in the same average. The second average might be more trusted because there is more consensus around a particular rating (a lower deviation).
(*In practice, some albums can have several thousand ratings)
This album is rated in the top 2% of all albums on BestEverAlbums.com. This album has a Bayesian average rating of 78.7/100, a mean average of 78.4/100, and a trimmed mean (excluding outliers) of 79.1/100. The standard deviation for this album is 14.6.

A Rainbow In Curved Air favourites

A Rainbow In Curved Air comments

This surely predates Tangerine Dream and many others. Very original, very,.,.

I see all of the positive comments about this album but I just don't get it. I will persevere thought and the rating may well go up with more listens.

Still as amazing as when I first heard it at school in 1969. Thank god for CD - I had wron out 2 vinyl copies by then!
An INCREDIBLY important and influential piece of music....

Wow! Almost 50 years old, and this is magical. As of now it's in my top 3 of 1969. And sure I haven't got that much of that year as well as the decade under my belt, this album is pretty mind-blowing and I am able to pick out the influences from this piece.

What an amazing fusion of minimalism, classical, jazz, electronic music, and wild experimentation

One of the most important works of all time.

This avantegarde masterpiece brought Riley to the attention of rock audiences. His improvised use of electronic keyboards, minimilist raga and repetitive rhythms and melodies was highly influential. The electronic psychedelic sounds Riley creates are colourful and uplifting.

Your feedback for A Rainbow In Curved Air