Living In The Material World (album) by George Harrison 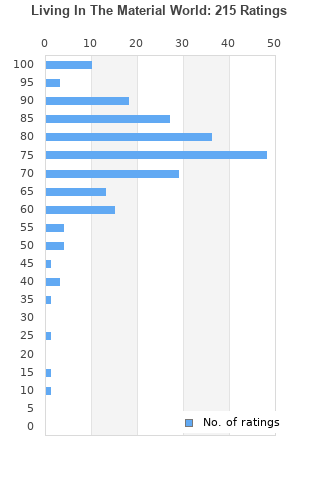 GEORGE HARRISON LIVING IN THE MATERIAL WORLD APPLE EAP-80840 Japan VINYL LP
Condition: Used
Time left: 2h 13m 36s
Ships to: Worldwide
$0.99
Go to store
Product prices and availability are accurate as of the date indicated and are subject to change. Any price and availability information displayed on the linked website at the time of purchase will apply to the purchase of this product.  See full search results on eBay

Living In The Material World is ranked 4th best out of 18 albums by George Harrison on BestEverAlbums.com.

The best album by George Harrison is All Things Must Pass which is ranked number 143 in the list of all-time albums with a total rank score of 12,474.

Listen to Living In The Material World on YouTube 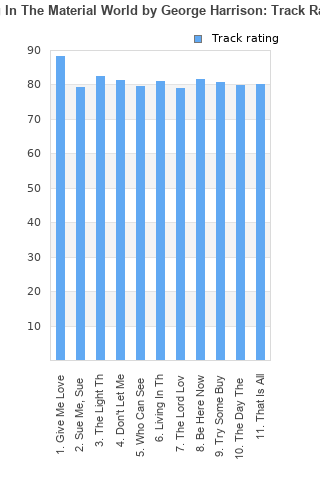 Living In The Material World rankings

Living In The Material World collection

Living In The Material World ratings

Rating metrics: Outliers can be removed when calculating a mean average to dampen the effects of ratings outside the normal distribution. This figure is provided as the trimmed mean. A high standard deviation can be legitimate, but can sometimes indicate 'gaming' is occurring. Consider a simplified example* of an item receiving ratings of 100, 50, & 0. The mean average rating would be 50. However, ratings of 55, 50 & 45 could also result in the same average. The second average might be more trusted because there is more consensus around a particular rating (a lower deviation).
(*In practice, some albums can have several thousand ratings)
This album is rated in the top 8% of all albums on BestEverAlbums.com. This album has a mean average rating of 75.0/100. The trimmed mean (excluding outliers) is 76.1/100. The standard deviation for this album is 14.5.

Living In The Material World favourites

Living In The Material World comments

Another one of the good albums Harrison put out in the 70s. This one has some good songs on It.

I like this better than "All things...". I'm not saying it's actually better, just that I enjoy this one more.
The sound is better -no wall of sound here- and I find the general peaceful mood very appealing. It's a relaxing record.

A good follow up to, all things must pass, albeit a little bit preachy. Still, living in the material world, does have some nice songs. Give me love, sue you,sue me blues, and the title track are all fine. Not essential like the previous record but still well worth having.

Kinda underrated, compared to "All things must pass", but still enjoyable record, unlike his next albums. "Give me love" it's not the only one decent song from the album. Some great ballads/soft rock songs can be heard from this album. Unfortunately there're too many slow and santimental songs, which is my main criticism from this album.

Decent album but nowhere neat "All Things...". My favorite tracks were "Give Me Love" and the title track.

A brilliant mellower complement to the bombastic All Things Must Pass.

George Harrison's third best behind All Things Must Pass and Brainwashed.

This album has some great balladry, excellent melodies and just shows what Harrison was all about.

Your feedback for Living In The Material World