All Things Must Pass (studio album) by George Harrison 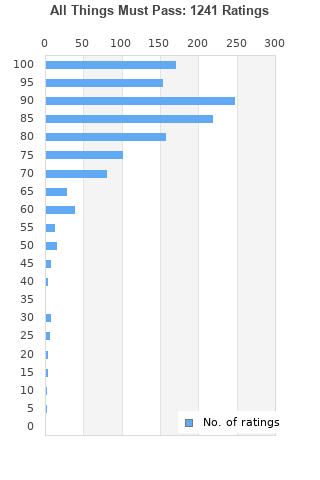 All Things Must Pass is ranked as the best album by George Harrison. 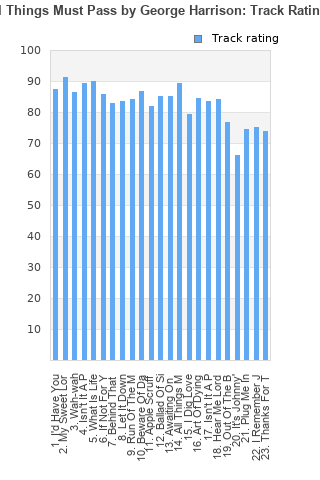 All Things Must Pass rankings

All Things Must Pass collection

All Things Must Pass ratings

Rating metrics: Outliers can be removed when calculating a mean average to dampen the effects of ratings outside the normal distribution. This figure is provided as the trimmed mean. A high standard deviation can be legitimate, but can sometimes indicate 'gaming' is occurring. Consider a simplified example* of an item receiving ratings of 100, 50, & 0. The mean average rating would be 50. However, ratings of 55, 50 & 45 could also result in the same average. The second average might be more trusted because there is more consensus around a particular rating (a lower deviation).
(*In practice, some albums can have several thousand ratings)
This album is rated in the top 1% of all albums on BestEverAlbums.com. This album has a Bayesian average rating of 84.7/100, a mean average of 83.9/100, and a trimmed mean (excluding outliers) of 84.8/100. The standard deviation for this album is 13.7.

All Things Must Pass favourites

All Things Must Pass comments

This album showcases the underappreciated-at-times talent of George Harrison. The best solo Beatle album and loaded with so many great songs.

Shocking for a triple album to be so consistently good all throughout (except maybe the jams on the third disc, I could live with or without them). But from tracks 1-18, I'm not sure I would call a single piece "filler." That run of the first six tracks alone is nearly perfect. And while I do love the hit singles My Sweet Lord and What Is Life, I think the best songs this album has to offer are Wah-Wah, Isn't It a Pity, and the beautiful title track. It's clear that George was harboring a load of songwriting genius that the other Beatles wasn't letting him properly show, and it all comes out on this record, which I'd say is better than a lot of those late Beatles albums (White Album, Let It Be, etc.). Highly recommend this one.

In its time - 1970 - it was a must have album. Although a triple record album, everyone I knew only played the first two records after the first time around. Definitely some classic songs. I liked it that Harrison & Dylan were forming deeper bonds at the time (bonds that culminate at Concert for Bangla Desh and continue in The Travelling Wilburys). George does a fine version of Dylan's 'If Not For You' and I have included it in my 'top 100 Dylan covers' chart.

This album grew on me a lot, but I still don"t like a couple of last tracks.

The 9 songs of CD 1 are absolutely majestic. The first 9 songs of CD2 are great. The jamms at numbers 10 - 14 don't add anything to me and Jonny's Birthday is a waste of time.

For George Harrison releasing an album of all his unheard material that he had written while with the Beatles was of extreme importance to him. This is his outpouring and he bares his heart and soul through this huge record. Finally it feels like we get to understand him more and this record allows him to flex his song writing muscles which had slowly but surely been growing. Admittedly the final LP of instrumentals is a little unnecessary but that isn't the reason anybody should listen to this masterpiece.

Arguably the best album released by a solo Beatle

This album suffers of being too long, by the time I reach such a good song as Art Of Dying I am bored with a lot if filoer tracks that came before. It could have a little less tracks and that would be greater listen.

Your feedback for All Things Must Pass