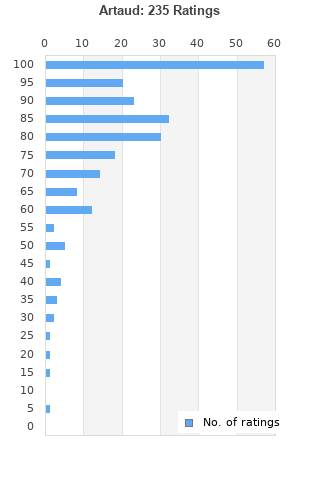 Pescado Rabioso ‎– Artaud (2020) New Vinyl from Argentina Sealed
Condition: New
Time left: 4d 12h 28m 25s
Ships to: Worldwide
$44.99
Go to store
Product prices and availability are accurate as of the date indicated and are subject to change. Any price and availability information displayed on the linked website at the time of purchase will apply to the purchase of this product.  See full search results on eBay

Artaud is ranked as the best album by Pescado Rabioso. 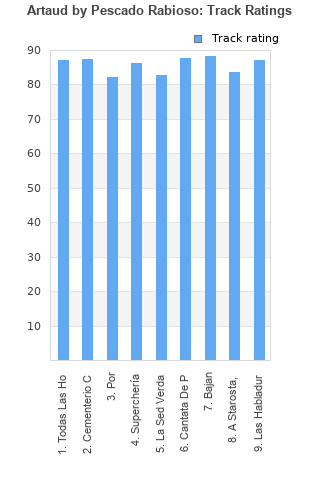 Rating metrics: Outliers can be removed when calculating a mean average to dampen the effects of ratings outside the normal distribution. This figure is provided as the trimmed mean. A high standard deviation can be legitimate, but can sometimes indicate 'gaming' is occurring. Consider a simplified example* of an item receiving ratings of 100, 50, & 0. The mean average rating would be 50. However, ratings of 55, 50 & 45 could also result in the same average. The second average might be more trusted because there is more consensus around a particular rating (a lower deviation).
(*In practice, some albums can have several thousand ratings)
This album is rated in the top 1% of all albums on BestEverAlbums.com. This album has a Bayesian average rating of 81.7/100, a mean average of 81.0/100, and a trimmed mean (excluding outliers) of 82.1/100. The standard deviation for this album is 19.3.

A fairly enjoyable rock album. I like the somewhat seamless blend of psychedelic, blues, and prog rock on this project. The guitar work is fantastic, as well as the songwriting. The somewhat bare instrumentation on some of the songs on this album, like on the song Cantata de puentes amarillos, is quite interesting and works surprisingly well. I couldn't tell you if the lyrics are bad or not, as I do not speak Spanish. I do think the singing is a bit weak and timid, sort of like Neil Young, but Young's arrangements and visions aren't as ambitious, which is why it works for him. It does not work as well for Luis Alberto Spinetta. That being said, it's not too much to complain about here, because Mr. Spinetta treats you to some fantastic and winding compositions.

One last thing, the original packaging for this record seems pretty cool if you were to think of it in your head, but it is very impractical and ugly in reality. That doesn't really effect my listening experience for this album, as I am streaming it, but it is something to take note of.

People should stop rating with just a quick and superficial listen. If you're commited to connect with an album in spanish language, and maybe to do some research regarding lyrics an context, you wouldn't give 40/100 or 60/100 to this masterpiece.

Masterpiece of all times. I wish people from this page would understand the importance of this album. Isn´t just the best album in Argentinian history: this is the best ever album sung in spanish lenguage.
A concept album composed by the great Luis Alberto Spinetta in a difficult moment of Argentina and on a folk style. After his broke-up from them band mates he decides to keep using the name Pescado Rabioso and record this solo album.
The lyrics are so fantastic as the music. A whole album about the impact of Antonin Artaud on Spinetta views about everything arround him on those days.
A classical album in music history that it´s unique even on the shape of the art cover, being an irregular form. As Spinetta said, "The album suicided by society" in allusion to Artaud´s book, "Van Gogh: the man suicided by society".

I hope that people from English-speaking countries will one day understand the value of this album and, that it has nothing to envy to the albums of European / American / Canadian / Australian artists. It is at the same level and even surpasses to many of them.

If there's a Holly Trinity of Latin Rock, Spinetta would be the Father. He has the attitude, the complexity, and the integrity to create an album that didn't translate from their English pairs, but actually created a language for us. Since Almendra, his first band, El Flaco showed everyone how to create music in Spanish taking advantage of the long tradition of Latin American folk sounds, like tango.

I discovered this album just two years ago and it echoed (and continues to echo) with a lot of music, specially Cerati's music and Omar Rodriguez Lopez projects.

Luis Alberto Spinetta was a big fan of John Lennon, and the latter's Plastic Ono Band is a point of reference to begin to understand the masterpiece known as Artaud. Both albums were recorded at times of turmoil in both artists' lives and in their respective countries, and this is reflected on the naked sincerity of their lyrics. But while Lennon made the decision to play straightforward rock with simple lyrics and simpler arrangements, Spinetta favored complex compositions full of weird voicings, surrealist imagery and avant-garde elements, best exemplified in the 9-minute suite 'Cantata de Puentes Amarillos', inspired by Van Gogh, Artaud and Elagabalus, the transgender Roman Emperor.

Although it is considered a fundamentally acoustic work, Artaud has its moments of electric grandeur, such as 'Las Habladurias del Mundo', 'Cementerio Club' and 'Bajan', showcasing Spinetta's axe skills. This is one of those records you can listen to a million times and still find something new. Highly recommended.

Your feedback for Artaud