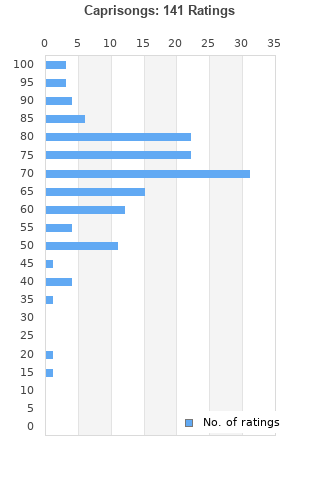 Caprisongs is ranked 4th best out of 4 albums by FKA twigs on BestEverAlbums.com.

The best album by FKA twigs is Magdalene which is ranked number 634 in the list of all-time albums with a total rank score of 2,933. 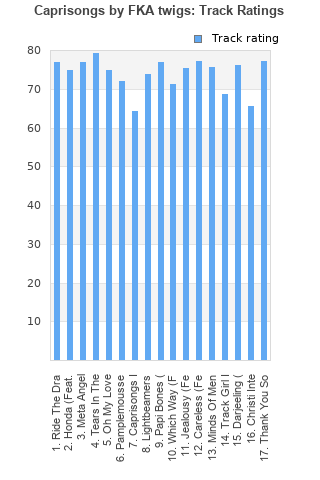 Rating metrics: Outliers can be removed when calculating a mean average to dampen the effects of ratings outside the normal distribution. This figure is provided as the trimmed mean. A high standard deviation can be legitimate, but can sometimes indicate 'gaming' is occurring. Consider a simplified example* of an item receiving ratings of 100, 50, & 0. The mean average rating would be 50. However, ratings of 55, 50 & 45 could also result in the same average. The second average might be more trusted because there is more consensus around a particular rating (a lower deviation).
(*In practice, some albums can have several thousand ratings)
This album has a Bayesian average rating of 70.2/100, a mean average of 69.8/100, and a trimmed mean (excluding outliers) of 70.0/100. The standard deviation for this album is 13.3.

A generally more mainstream and boppy collection of tracks than those on other Twigs projects. You can tell she's having fun and just letting loose here.

Some nice songs and some boring songs

I had never heard of this person until I reviewed their record (similarly to Earl Sweatshirt), and I was not too pleased with this mixtape. I hate when she has a good or great thing going that just fades away into the realm of conversations that I genuinely don't need to hear, and odd electronic instruments that take away from the quality of the song's base.

Great listen, the sound really grew on me. The B side is so much better than the start of the album.

It's her weakest album yet, but "weak" for FKA Twigs is still a pretty great album.

Your feedback for Caprisongs