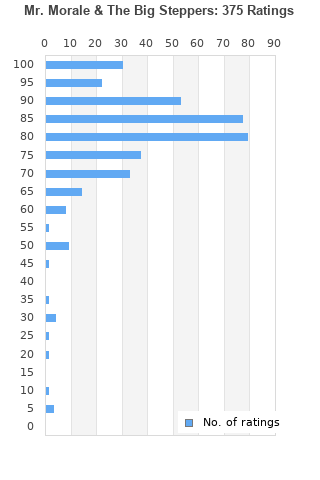 Mr. Morale & The Big Steppers is ranked 6th best out of 9 albums by Kendrick Lamar on BestEverAlbums.com.

The best album by Kendrick Lamar is To Pimp A Butterfly which is ranked number 20 in the list of all-time albums with a total rank score of 40,593.

Listen to Mr. Morale & The Big Steppers on YouTube 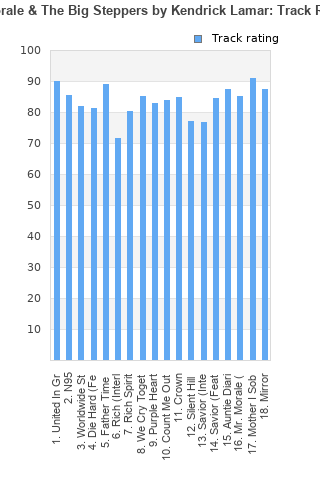 Rating metrics: Outliers can be removed when calculating a mean average to dampen the effects of ratings outside the normal distribution. This figure is provided as the trimmed mean. A high standard deviation can be legitimate, but can sometimes indicate 'gaming' is occurring. Consider a simplified example* of an item receiving ratings of 100, 50, & 0. The mean average rating would be 50. However, ratings of 55, 50 & 45 could also result in the same average. The second average might be more trusted because there is more consensus around a particular rating (a lower deviation).
(*In practice, some albums can have several thousand ratings)
This album is rated in the top 1% of all albums on BestEverAlbums.com. This album has a Bayesian average rating of 83.0/100, a mean average of 83.3/100, and a trimmed mean (excluding outliers) of 83.9/100. The standard deviation for this album is 12.3.

A bit of a let down, sadly. Too much story, not enough music. The lyrics are great (for the most part), even though he can get a bit shouty at times, and the musical choices are interesting, if underwhelming at times. I wish there were more bangers and hooks, like on DAMN or Good Kid. I feel like he leans too hard on the musical theatre aspects of TPAB, without the adventurous, playful musical directions. It'll probably grow on me, but my first take is slight disappointment.

@Boltzmann, As a leftist, please shut the fuck up

Kendrick Lamar’s new album is perhaps his most personal with memorable triumph and tragedy. While his discography is already impressive, this sits among his best.

I see this album as everything it needed to be for Kendrick; & by extension, the listener. After living with crushing pressure like he has in the eyes of the media & music industry for so long, it's really nice seeing an album release that doesn't care to be everything for others. After all, those who rely on exterior influences for their own progress will always have the hardest time growing. While I love how much he's done & how many ideas he's dismantled through his career, I'm glad he made something almost specifically for hashing out his mental & easing the load. Which, funny enough, still serves to ease those under similar circumstances demonstrated throughout the project. People gotta learn to slow down in this country, this coming from a sheltered white boy from a proud American home; it still holds very true, pressure is unrealistic across the board because so many people refuse to help themselves. Kendrick did it for him, bless this man. That's why it's even more powerful to others. He's deconstructed the weight that modern expectation has come to. The summation of all the entitled web creeps that need everything from everyone & then some; fugg em. The main idea I see present in the cover art shows Kendrick finding a way to repurpose his self destructive & draining savior complex. While it has done more good than most people will ever achieve, it doesn't change how harmful it is. The fact he's turned his back to unrealistic expectations for the sake of himself & his family will never be short of incredible. It wasn't an album I expected at all, & I'm glad my expectations were flipped on their head. It's hard to come out of this project without an even deeper love for this man. Brownie points for dropping such a therapeutic album for him, especially during mental health awareness month. Chef's kiss, I love it! :3

I don't comment on here too often but really wanted to give my opinion on Auntie Diaries and some first impressions of the album. Obviously can't speak for any other trans or queer people but there's so much I love about Auntie Diaries and I think it tackles ideas around prejudice, tolerance and acceptance so well. I've seen some criticism of Kendrick using misgendering and deadnaming* from people who still see the positive intent of the track but I think these are actually vital to getting his point across. A lot of the song comes from a place of tolerating but not understanding the trans people in his life. Saying 'my auntie was a man now, we cool with it' gets across a kind of acceptance but the misgendering in this line and in the verses show that his uncle still isn't being seen as who he really is. The final verse changes this. When push comes to shove and Kendrick is forced to challenge this mindset he doesn't just tolerate his cousin, he accepts her. There's a deeper understanding from this point on. Ending the verse by talking to her directly really gets this new closeness across.

Through transition I've been scared of people not accepting me at all but I've also been scared of people accepting me as a surface level thing. Like they're being polite and playing along instead of seeing me for who I am. It often starts that way with people but after some time you see a shift from tolerance to acceptance in the way Kendrick's last verse describes. Without the uncomfortable moments in the track, it wouldn't have been able to get across these subtle points at all. If Kendrick had written a track just about how proud he was of the trans people he knew it would be nice and all, but it wouldn't really get to a deeper level, challenge the listener or keep within the themes of the record.

The record as a whole is very dense and I'll have to give it a few listens before I can form anything like a full opinion but some stuff has stood out on first listen. Most tracks here are really good but a couple didn't do much for me, I think a bit of an edit could have made things a bit more focussed. I really appreciate the lyrical themes of breaking destructive cycles through forgiveness and mutual understanding. The individual songs build to this brilliantly but Kendrick making a point of including Kodak Black on the album hinders this message, I think his inclusion here is a mistake. Mother I Sober is one of Kendrick's best songs and shows that he is a one of a kind artist. I'm really looking forward to going back over this and seeing how much reveals itself on repeat listens.

* I do wish he hadn't deadnamed Caitlin Jenner though. He knew the other people who were deadnamed in the song and probably had their blessing before releasing it, this won't have been the case with Caitlin. Deadnaming her felt very unnecessary.

I find it a little funny. Kendrick did not go in the direction that everyone thought/wanted and now the music community is in shambles. I know he did this on purpose and honestly I love it.

Kendrick straight up just dropped best album of the year and his career.
I'm still in awe.

Another masterpiece from the one and only Kendrick Lamar.

This is such a brutally honest and personal record. This whole album feels like a therapy session the way Kendrick so openly discusses his personal demons and traumas. It's simultaneously his darkest and his most uplifting album yet. While I don't think it's perfect, it think it was certainly worth the five year wait.

Your feedback for Mr. Morale & The Big Steppers