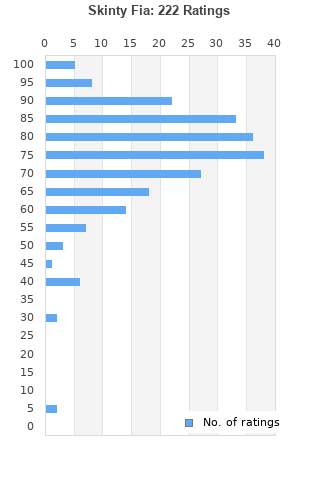 Skinty Fia is ranked 3rd best out of 4 albums by Fontaines D.C. on BestEverAlbums.com.

The best album by Fontaines D.C. is Dogrel which is ranked number 1526 in the list of all-time albums with a total rank score of 1,144. 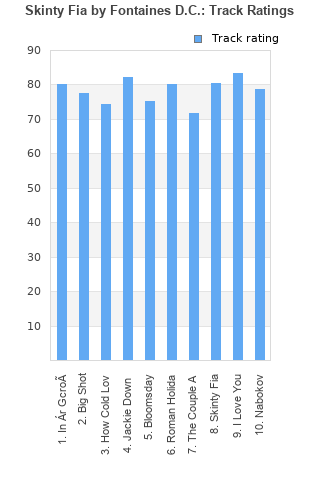 Rating metrics: Outliers can be removed when calculating a mean average to dampen the effects of ratings outside the normal distribution. This figure is provided as the trimmed mean. A high standard deviation can be legitimate, but can sometimes indicate 'gaming' is occurring. Consider a simplified example* of an item receiving ratings of 100, 50, & 0. The mean average rating would be 50. However, ratings of 55, 50 & 45 could also result in the same average. The second average might be more trusted because there is more consensus around a particular rating (a lower deviation).
(*In practice, some albums can have several thousand ratings)
This album is rated in the top 4% of all albums on BestEverAlbums.com. This album has a Bayesian average rating of 77.6/100, a mean average of 77.3/100, and a trimmed mean (excluding outliers) of 78.1/100. The standard deviation for this album is 13.2.

The radio station I listen to keeps playing Jackie Down the Line and it makes me sick every time I have to hear that godawful singing. How the hell does someone get away with singing that badly?

Fontaines DC's Dogrel was one of the best albums of the last decade, a radical statement and profoundly new. A Hero's Death was flat, boring, and a derivative foray into a foggy memory of post-punk. Skinty Fia is somewhere in the middle. In ár gCroíthe ge deo is a sinister and brooding introduction, while centring irish language and agency (the song responds to Church of England's discriminatory treatment of an Irish woman's epitaph in Coventry), and then Big Shot is utter crap. That's kind of the rhythm of Skinty Fia, you get a great song, and then tune out for a bit, and then roped back in, etc. etc. Hard to really score this one.

By far their best record

This band continues to churn out bangers like it's easy. I like how they're flirting with shoegaze this time around.

Your feedback for Skinty Fia