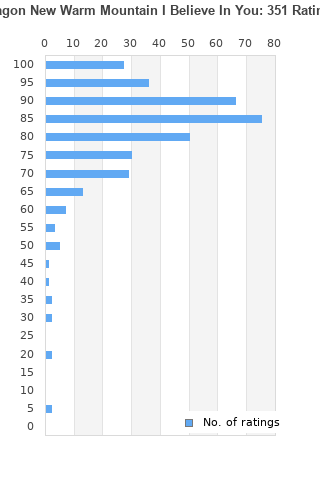 Dragon New Warm Mountain I Believe In You is ranked 5th best out of 6 albums by Big Thief on BestEverAlbums.com. 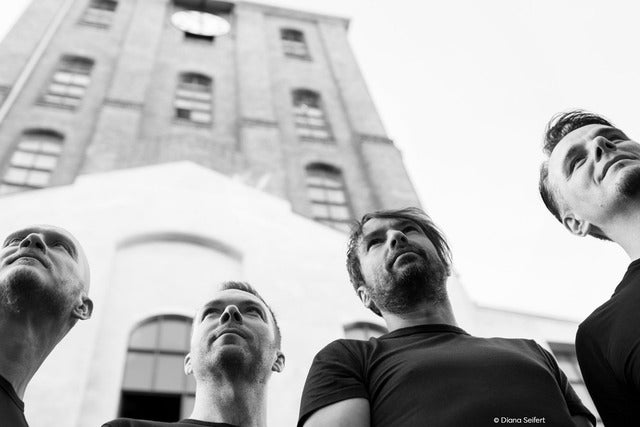 Dragon New Warm Mountain I Believe In You track list 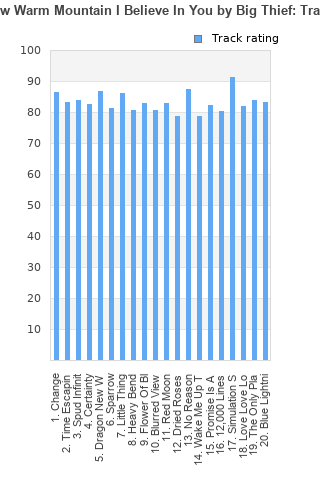 Dragon New Warm Mountain I Believe In You
Rating: 88 (75 votes)Comments:

Dragon New Warm Mountain I Believe In You rankings

Dragon New Warm Mountain I Believe In You collection

Dragon New Warm Mountain I Believe In You ratings

Rating metrics: Outliers can be removed when calculating a mean average to dampen the effects of ratings outside the normal distribution. This figure is provided as the trimmed mean. A high standard deviation can be legitimate, but can sometimes indicate 'gaming' is occurring. Consider a simplified example* of an item receiving ratings of 100, 50, & 0. The mean average rating would be 50. However, ratings of 55, 50 & 45 could also result in the same average. The second average might be more trusted because there is more consensus around a particular rating (a lower deviation).
(*In practice, some albums can have several thousand ratings)
This album is rated in the top 1% of all albums on BestEverAlbums.com. This album has a Bayesian average rating of 84.0/100, a mean average of 83.9/100, and a trimmed mean (excluding outliers) of 84.5/100. The standard deviation for this album is 12.0.

Dragon New Warm Mountain I Believe In You favourites

Dragon New Warm Mountain I Believe In You comments

Expected something pretty different based on other material I had listened to from Big Thief, but I really enjoyed this one. My favorite albums recently have been extremely long projects with diverse sounds and a bunch of hit-or-miss songs, and this is just right up that alley.

I’ve been slightly lukewarm about Big Thief since their debut which was stellar but this album blew me away. When I heard it was going to be so long I immediately lowered my expectations but I have NEVER seen anyone keep this level of quality up for this long of an album. Every song brings something to the table, the songs are perfectly balanced- unique enough to keep you from getting bored but similar enough that it all sounds cohesive. Overall just very impressed

Might be an 8 with time and louder playback. I don't care for many of the songs on this kinda bloated release, but there are some great tunes too. However, most of these were previously released as singles, in some cases ages ago – Simulation Swarm, perhaps the best song on the record, we could listen to over a year ago. Very little here is bad writing, but nothing is new for Big Thief. One thing that is different is the production: drummer James Krivchenia did all of it and it's kinda shit. For such a long record, why you would think it's a good idea to record everything from what sounds like an absurd distance? This just makes the whole thing sound so much duller than it needs to be, and that hour and 20 starts to feel like an eternity.

I don't get the hype. I should love this: The country-folk of Neil Young and the oddball lyrics Meat Puppets combined into one.

But it's too long, scattered, and doesn't have the charm to bring me in. And it's pompous as hell.

Spectrum Pulse said it "has the feel of Brooklynite hipsters playing [country-folk] for a goof, and it's as tacky as it always is," and I totally agree.

Both this and "Ants From Up There" came out in the same month. This is gonna be a good ass year for music.

One of the biggest glow-up for me, it's the first Big Thief record that I really appreciate and I can say it might end to be one of the most solid indie folk records of the decade

Just a really lovely record that's so relaxing to listen too, yet as mentioned in other comments doesn't overstay it's welcome at all despite it's length and number of tracks.

A pretty great collection of folk/americana tunes with some real instant-classics thrown into the mix. Great guitar work, and great singing on Adrianne's part.

Your feedback for Dragon New Warm Mountain I Believe In You