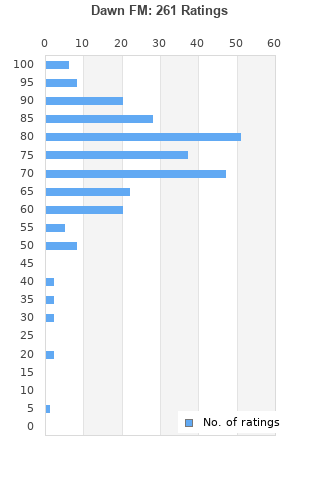 Dawn FM is ranked 5th best out of 11 albums by The Weeknd on BestEverAlbums.com.

The best album by The Weeknd is House Of Balloons which is ranked number 987 in the list of all-time albums with a total rank score of 1,870. 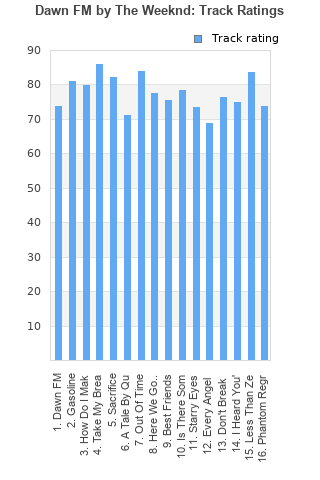 Rating metrics: Outliers can be removed when calculating a mean average to dampen the effects of ratings outside the normal distribution. This figure is provided as the trimmed mean. A high standard deviation can be legitimate, but can sometimes indicate 'gaming' is occurring. Consider a simplified example* of an item receiving ratings of 100, 50, & 0. The mean average rating would be 50. However, ratings of 55, 50 & 45 could also result in the same average. The second average might be more trusted because there is more consensus around a particular rating (a lower deviation).
(*In practice, some albums can have several thousand ratings)
This album is rated in the top 17% of all albums on BestEverAlbums.com. This album has a Bayesian average rating of 74.6/100, a mean average of 73.6/100, and a trimmed mean (excluding outliers) of 74.7/100. The standard deviation for this album is 13.8.

Cool concept. Gets better with multiple listens. The production oscillates between ethereal and titanic as needed. Definitely better than the sum of its parts, though. There are a bunch of tracks that stick out and others that leave my brain as I'm listening to them. But another good album from The Weeknd, nonetheless.

This is probably one of the best pop-albums of this decade, and in my opinion of all time. I think every song on this album is amazing. Truly consistant, and songs like "Take my Breath" and "Out of Time" are instant classics. I'ts not going to be liked by everyone, but i belive this is a definate statement which puts The Weeknd second to only MJ in terms of Male Pop artists

I have a real soft spot for 'Dawn FM' as I love anything remotely disco/ Daft Punk-esque. Max Martin and co blending this retro sound with their immaculate modern pop production and topped off with The Weeknd's haunting voice makes for a real good time IMO B^)

Abel goes hard on the synth pop ballads. 80s vibes all over. And themes of stalking and hell and possessive love.

At the time of writing (mid-July '22), it has kept a position in the overall top ten of 2022. I wonder if it'll keep this position at the end of the year.

“Dawn FM” really goes full in on the synthwave sound. Abel abandons the slow drifting electronics of “After hours” for more vibrant, energetic synths. This newfound energy gives his voice a welcome boost. The vigor of the tracks helps cover up odd moments like the strange English accent that appears. The purgatory concept is limited by songwriting crutches. Two thirds of the album can be summarized with our love is destructive but powerful and we have really great sex. This is significantly less interesting than the explorations of limbo given in Jim Carrey’s radio commercials. ““Dawn FM” has a more infectious sound that would have greatly benefited from a tighter concept.

Another solid addition to the Weeknd's catalogue, but doesn't top After Hours or House Of Balloons for me.

This album is good, but not great. It is allowed to stand with the merits of its predecessor, After Hours (because it is part of a trilogy along with its predecessor), but the back end of this album is not very good. I love the first five songs (the title track, "Gasoline," "How Do I Make You Love Me?," "Take My Breath," and "Sacrifice"), but after that Quincy Jones monologue, it quickly falls downhill. I don't think Tyler, the Creator or Lil Wayne are needed, and, Jim Carrey's narration is also not needed. I would much rather see him doing something he likes than doing something as an homage to the 1980s.

This album is fantastic but not without flaws. It's filled with absolute bops. It has superb production. The radio-purgatory motif is alright. I'm indifferent to the interludes. I don't like the features though I prefer Wayne's. I saw that The Weeknd said a Toronto radio station was an inspiration but I can't help but think that the executive producer's namesake, Boston's Magic 106.7, also played a part. Thinking of how this record was conceived is unnerving to me. The idea of tripping balls with The Weekend and Jim fucking Carrey is a nightmare.

I preferred After Hours but there was still some good moments. I liked the theme and the narration also.

Your feedback for Dawn FM