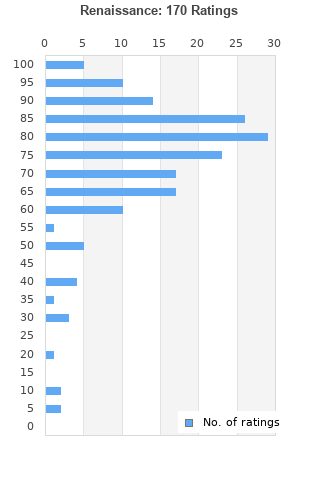 Renaissance is ranked 8th best out of 10 albums by Beyoncé on BestEverAlbums.com.

The best album by Beyoncé is Lemonade which is ranked number 510 in the list of all-time albums with a total rank score of 3,681. 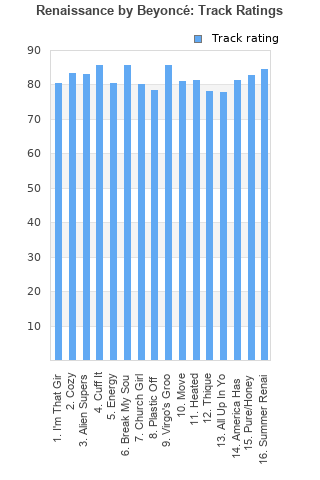 Rating metrics: Outliers can be removed when calculating a mean average to dampen the effects of ratings outside the normal distribution. This figure is provided as the trimmed mean. A high standard deviation can be legitimate, but can sometimes indicate 'gaming' is occurring. Consider a simplified example* of an item receiving ratings of 100, 50, & 0. The mean average rating would be 50. However, ratings of 55, 50 & 45 could also result in the same average. The second average might be more trusted because there is more consensus around a particular rating (a lower deviation).
(*In practice, some albums can have several thousand ratings)
This album is rated in the top 4% of all albums on BestEverAlbums.com. This album has a Bayesian average rating of 77.6/100, a mean average of 76.3/100, and a trimmed mean (excluding outliers) of 78.1/100. The standard deviation for this album is 15.9.

Renaissance has a lot of redeeming features, mostly how Beyoncé historicises the disco canon. However, it is also indisputably overhyped, a prime example of the way popstars of the 21st century post-album-distribution hellscape of streaming can waltz into mass critical appraisal with a single foray into big concept driven "high art" full album. Beyonce has proven already with Lemonade that she can be more than a singles artist, so I don't want to suggest that it's entirely bad faith, just more that let's settle at pretty good at best rather than "revolutionary". Moreover, people are and will continue to attach other weirdly hyperbolic triumphalist tags to this – i.e. music as celebration of [insert your choice of really anything] – and that's nice and all, but this really only is somewhat convincing when Beyonce is looking back and celebrating 70s/80s black musicianship, a well trodden path in the last decade. Early tracks like Alien Superstar and Cuff it are perfect examples of modernised disco, they are genuinely fun songs to return to, but god the areas in this indulging in contemporary pop and trap trends, as if they too are – in a way – as iconic as Donna Summer ruin this. Energy is the first completely terrible song, exemplifying the worst of Beyonce-does-Jay Z nonsense. While Break My Soul's sudden interruption of it makes for a very fun opening of the single (which, when initially heard in isolation seemed very cringe), the irony in that opening sample is a little lost by Beyoncé doing it rather than James Ferraro. I think Renaissance starts to get back on track with Virgo's Groove, but the backend of this is littered with sleepfest tracks like Move and All Up In Your Mind, which honestly should have been binned (Virgo's Groove -> Pure/Honey would have been a nice transition). Summer Renaissance's celebration of I Feel Love, which should also retrospectively be a celebration of "Renaissance" – or a track that rationalises why Beyonce needed to do this – just ends up making me want to listen to the original 12" to be brutally honest. Beyonce is at her best in Renaissance when she is subtle rather than overt with the referentiality. It's a record that could open a window to the past for zoomers, but worst case this will date itself quickly.

I can't stop laughing at the album cover.

Your feedback for Renaissance