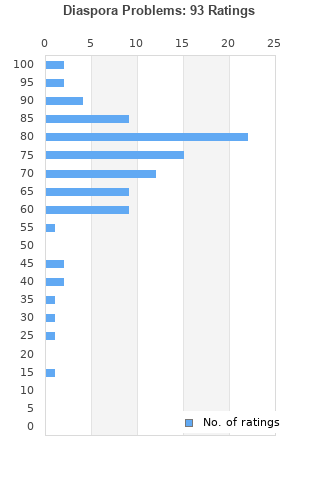 Diaspora Problems is ranked as the best album by Soul Glo. 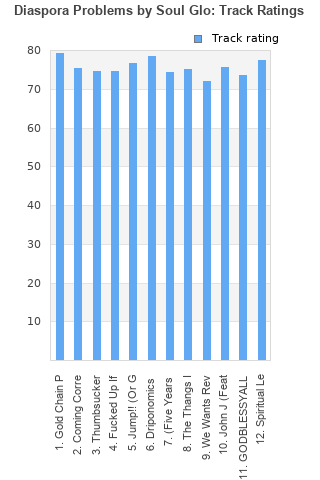 Rating metrics: Outliers can be removed when calculating a mean average to dampen the effects of ratings outside the normal distribution. This figure is provided as the trimmed mean. A high standard deviation can be legitimate, but can sometimes indicate 'gaming' is occurring. Consider a simplified example* of an item receiving ratings of 100, 50, & 0. The mean average rating would be 50. However, ratings of 55, 50 & 45 could also result in the same average. The second average might be more trusted because there is more consensus around a particular rating (a lower deviation).
(*In practice, some albums can have several thousand ratings)
This album has a Bayesian average rating of 73.0/100, a mean average of 72.5/100, and a trimmed mean (excluding outliers) of 73.0/100. The standard deviation for this album is 14.3.

Death Grips meets TV On The Radio with deafening consequences.

Idk this one’s not for me, maybe I’m just getting old or something.

Intense and searing project that blends frantic hardcore with avant hip-hop and passes comment on the state of contemporary US society with unflinching honesty.

I listen to hip hop, jazz, rock, electronic, pop, classical, post-punk, trap, RnB, art pop, reggae, metal, whatever, but I don't listen to a lot of punk or grindcore. This appealed to me despite that. Quite a lot of variation in production. And so much justified anger.

I'll hear it again and perhaps even like it more.

Your feedback for Diaspora Problems