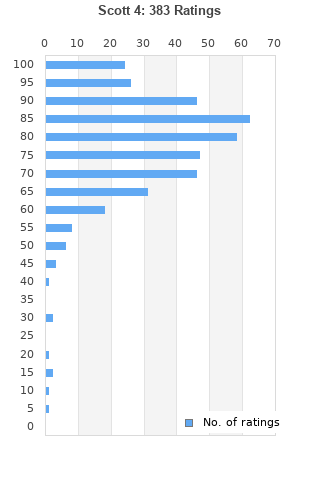 Scott 4 is ranked as the best album by Scott Walker. 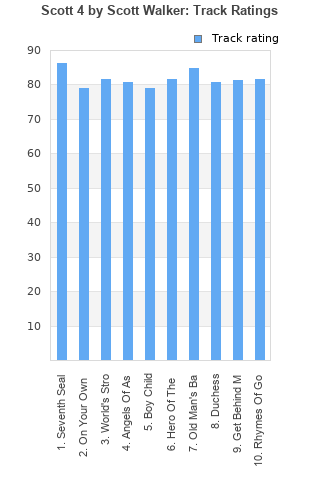 Rating metrics: Outliers can be removed when calculating a mean average to dampen the effects of ratings outside the normal distribution. This figure is provided as the trimmed mean. A high standard deviation can be legitimate, but can sometimes indicate 'gaming' is occurring. Consider a simplified example* of an item receiving ratings of 100, 50, & 0. The mean average rating would be 50. However, ratings of 55, 50 & 45 could also result in the same average. The second average might be more trusted because there is more consensus around a particular rating (a lower deviation).
(*In practice, some albums can have several thousand ratings)
This album is rated in the top 2% of all albums on BestEverAlbums.com. This album has a Bayesian average rating of 78.8/100, a mean average of 77.8/100, and a trimmed mean (excluding outliers) of 78.9/100. The standard deviation for this album is 14.9.

Scott Walker's vocal is simply phenomenal and he absolutely commands this album right from the first track right up until the conclusion. His voice feels so rich and warm which makes it such a pleasure to be able to listen to. He really has one of the greatest vocals of all time. He backs up his voice with some brilliant songs as well which are full of depth and create a fantastic atmosphere. The guitar playing is beautiful and the way he builds off of it is just genius. This makes the whole record feel grand as the diverse instrumentation weave a story in the background of the voice which is such a joy to explore. One of the best examples of this is Rhymes Of Goodbye which is such a delicate, emotional and stunning song that feels elegant and special to listen to. Overall, a couple weaker songs keep this album back from being amongst the greatest of all time but it still is truly brilliant and deserves the attention of every music fan as it is just so beautiful.

This is great, but I was under the impression this was an avant-garde album??? It's not in the slightest, it's just some nice baroque pop.

After listening to this again in the context of his first three albums, I’ve developed an admiration for it. I think I love “Angels of Ashes” and “The Old Man’s Back Again”. It’s still littered with weaker tracks and I still think it’s a little overrated, but not offensively so.

Scott Walker somehow eluded stardom despite coupling the kind of imagery and storytelling — that would show up later in the work of artists like Warren Zevon — and downright beautiful compositions. Scott 4 is probably the best of his early work and just a gorgeous album from a great vocalist.

Brilliant album, ahead of its time. Every song is wonderful, but highlights are The Seventh Seal, and the incredible The Old Man's Back Again. Underrated.

A brilliant album, possibly Scott Walkers best. It's full of superb atmospheric orchestral tracks with a sprinkling of quirkiness. The seventh seal, based on the great Bergman movie is a lot of fun. Other standouts include, world's strongest man, and the excellent, duchess. Brilliant record.

Your feedback for Scott 4