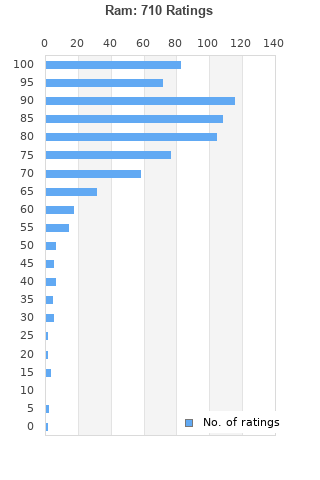 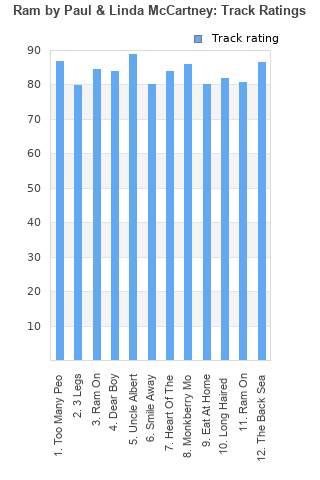 Rating metrics: Outliers can be removed when calculating a mean average to dampen the effects of ratings outside the normal distribution. This figure is provided as the trimmed mean. A high standard deviation can be legitimate, but can sometimes indicate 'gaming' is occurring. Consider a simplified example* of an item receiving ratings of 100, 50, & 0. The mean average rating would be 50. However, ratings of 55, 50 & 45 could also result in the same average. The second average might be more trusted because there is more consensus around a particular rating (a lower deviation).
(*In practice, some albums can have several thousand ratings)
This album is rated in the top 1% of all albums on BestEverAlbums.com. This album has a Bayesian average rating of 82.0/100, a mean average of 80.9/100, and a trimmed mean (excluding outliers) of 82.1/100. The standard deviation for this album is 15.6.

This may be Paul's best post Beatles album, and it is absolutely brimming with ideas. It may be too cute for some, but there is not a weak track here. My favourites are Dear Boy, Too Many People and Back Seat of my Car.

McCartney's finest solo record. It is focused beyond belief paying close attention to showing each part of McCartney's varied styles of writing. It is goofy and fun but still manages to be poignant and reflective. An underrated gem.

I am not big fan of his solo stuff, but that was fine listen with some highlights.

Along with Band on the Run, Paul's finest solo outing. Actually, I think it's slightly better than the 1973 album. Macca is at his best here, creating the sort of effortless pop music that he churned out with The Beatles. Some daft lyrics, but I don't go to McCartney for lyrics, but melody and musicianship. Ram delivers in spades, and is a joy from front to back.

Paul's best solo album. "Dear Boy," "Backseat," "Too Many People," "Uncle Albert," and "Heart of the Country" are among his greatest compositions. I actually like the Linda singing. It's part of the album's charm. It works.

This is a very underappreciated album I think. There is a lot of great songs on here and all of them are really infectious and catchy. I don't know why this record doesn't get any attention whatsoever as this is probably one of Paul's best albums post Beatles.

The hostile attacks that Paul had to suffer in the early seventies were simply scandalous. John and George were considered to be the true geniuses of the Beatles. Paul could only make muzak. So they said.

It was a time when pompous music was all the rage and Paul didn't deliver on this. With Ram, he made down to earth pop gems. Music that would not be appreciated for at least ten years. I'm happy the tide has turned. Paul is a genius. Ram is a gem.

Your feedback for Ram