Dizzy Up The Girl (studio album) by Goo Goo Dolls 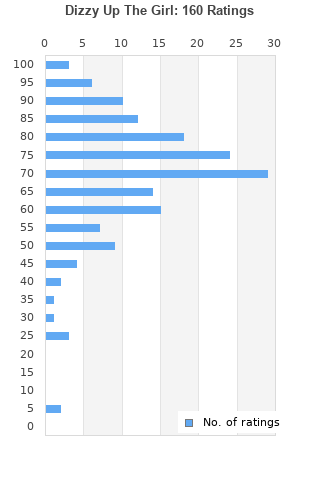 Dizzy Up The Girl is ranked as the best album by Goo Goo Dolls. 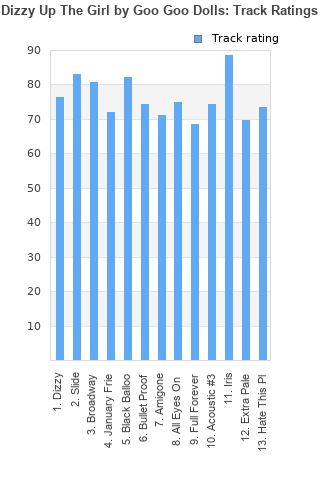 Dizzy Up The Girl rankings

Dizzy Up The Girl collection

Dizzy Up The Girl ratings

Rating metrics: Outliers can be removed when calculating a mean average to dampen the effects of ratings outside the normal distribution. This figure is provided as the trimmed mean. A high standard deviation can be legitimate, but can sometimes indicate 'gaming' is occurring. Consider a simplified example* of an item receiving ratings of 100, 50, & 0. The mean average rating would be 50. However, ratings of 55, 50 & 45 could also result in the same average. The second average might be more trusted because there is more consensus around a particular rating (a lower deviation).
(*In practice, some albums can have several thousand ratings)
This album has a Bayesian average rating of 70.6/100, a mean average of 69.5/100, and a trimmed mean (excluding outliers) of 70.4/100. The standard deviation for this album is 16.7.

Dizzy Up The Girl favourites

Dizzy Up The Girl comments

Goo Goo Dolls follows in the footsteps of The Replacements and Social Distortion, with melodic rock, soulful vocals, and heartfelt songwriting. Groups like Gaslight Anthem and The Menzingers took up the torch a decade later, and similar to the groups I listed, they had a ragged angsty false start before maturity allowed for more heart-on-sleeve performances.

We have producer Rob Cavallo to thank for capturing the energy and spirit of the group and making them palatable enough to play on the radio. Iris is of course a Goo Goo Dolls staple and a landmark rock track from the turn of the millennium, but this is the top of the iceberg. Speaking of tips, this record is top-heavy. The first five tracks is the strongest part of the album, followed by five OK tracks, then Iris, with two tracks serving as an epilogue.

And I love the group came from Buffalo NY in the days before global free trade stole the Midwest's heart and soul.

One of the best pop rock albums of the decade, several hits and a consistent tune throughout. Iris is one of the best rock ballads ever made.

with Iris being possibly the best rock ballad EVER written and the rest of the album being a decent soft rock collection it bugs my mind how in the world this album is not in top 10 of '98 on this site.

Some people despise Dizzy Up The Girl for it's jangling guitars and radio-friendly pop sound, not to mention the killer hit single Iris. Others, I included, think it's one of the better alliterative rock albums of the late 90s. It's not particularly diverse in terms of music and lyrics, but it's incredibly infectious and easy to listen to. This album is one of the few ones where I love almost every single song and never tire of listening to them; whether it's the emotional impact of Black Balloon and Iris or the more uptempo energy of Broadway and January Friend. Amigone is an example of a song buried under the greatness of the surrounding songs, but it's not a bad song by any means. Acoustic #3 just kind of sits there at the tail end of the album and I don't really understand the point of the song; for me, it's the weakest song on the album.

Seriously, though, Iris might very well be one of the finest rock ballads ever written and recorded.

I loved "Iris" and it definitely was the best track on this album. The rest was alright. As far as pop rock albums go this was a good one.

Very good album. Some of their best songs. Only thing keeping it from a great album is writing ans singing of Robby Takac.

I never got the hate for a lot of these types of bands.

Their best album, every song is good and it spawned a number of memorable singles.

Your feedback for Dizzy Up The Girl