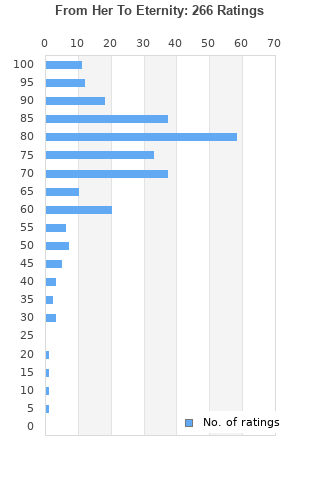 From Her To Eternity is ranked 12th best out of 25 albums by Nick Cave & The Bad Seeds on BestEverAlbums.com.

The best album by Nick Cave & The Bad Seeds is The Boatman's Call which is ranked number 365 in the list of all-time albums with a total rank score of 5,406. 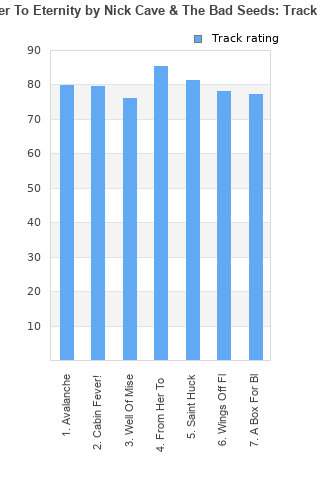 From Her To Eternity
Rating: 85 (61 votes)Comments:

From Her To Eternity rankings

From Her To Eternity collection

From Her To Eternity ratings

Rating metrics: Outliers can be removed when calculating a mean average to dampen the effects of ratings outside the normal distribution. This figure is provided as the trimmed mean. A high standard deviation can be legitimate, but can sometimes indicate 'gaming' is occurring. Consider a simplified example* of an item receiving ratings of 100, 50, & 0. The mean average rating would be 50. However, ratings of 55, 50 & 45 could also result in the same average. The second average might be more trusted because there is more consensus around a particular rating (a lower deviation).
(*In practice, some albums can have several thousand ratings)
This album is rated in the top 7% of all albums on BestEverAlbums.com. This album has a Bayesian average rating of 76.3/100, a mean average of 75.1/100, and a trimmed mean (excluding outliers) of 76.4/100. The standard deviation for this album is 15.6.

From Her To Eternity favourites

From Her To Eternity comments

This rating is for the original lp and not the embarrassing cd re release. Normally bonus tracks are placed after the original lp so the album can be heard as intended. In their wisdom the brain surgeons at Liberation decided to plonk The Moon is in the Gutter and In the Ghetto in between the end of side one and the start of side two thus ruining the listening experience of one of the most idiosyncratic records I've heard. Lyrically one of the most poetic and powerful albums ever released and a fair eye opener when I bought it as a 14 year old. From Her to Eternity will never be everyone's cup of tea but for the fans it's unforgettable.

Nick cave's debut album. I still think it ranks amongst his best. It's the nearest any of his solo records get to the sound of the birthday party. Opener, a cover of Leonard Cohen's avalanche, is a superbly brooding start to a dark and creepy album. Best of the tracks are the Mark Twain inspired, saint huck, cabin fever , the title track, and the excellent closing track, a box for black Paul. I think my favourite is, well of misery, which has some wonderful backing vocals . Stunning. A brilliant first album from a man who's never made a bad record. Great.

One of the most jaw-dropping experiences you'll ever have. Punk meets the blues as Cave wails and shrieks through some of the oddest, most devastating music you'll ever hear. The title track is among Cave's best songs, while "A Box for Black Paul" features haunting, vivid metaphors referring to Cave's previous band The Birthday Party.

Favorite tracks: "From Her to Eternity", "A Box for Black Paul", "Saint Huck", "Avalanche"

The first time that I heard this record it kind of made me depressed, or perhaps it exasperated the down mood that I was in. The cd reissue seemed to be more of an interesting listen, although this is not any sort of party record by definition. I prefer latter day Cave and the Bad Seeds, but his early work with the band is still essential. This one though should be considered for only the die-hard fans.

nick caves most intense album, and that makes it so amazing

Kind of eerie....but honestly you would have to be psychic to spot any sign of greatness in Cave based on this album. It is not at all bad, but it's a fledgling first effort from an artist who was still very much in a developmental stage.

Good, dark, somewhat-abstract alt rock. My rating reflects the cd reissue including "in the ghetto" (65) and "the moon is in the gutter" (55) (but i'm not considering the 1987 version of the title track).

This has to be the Bad Seeds' darkest recording in their entire career which automatically makes it the darkest recording ever (or close enough). That darkness doesn't comes in terms of mood, atmosphere or lyrics but as a whole concept of bizarre and raw sounds scattered around on the floor whic Cave picked up to craft the strangest and most uncomfrtable record ever and yet still sound masterfully focused and ahead of its time. This is the closest that somebody has been to replicate that unique feeling of wonder and enchantment of Beefhart's Trout Mask Replica but it still feels much as its own...

Sparse and violent. Lyrics are spot on. I'm keeping hold of mine for future listening. Could need the right mood. Saint Huck was the best!

Your feedback for From Her To Eternity