Your Funeral... My Trial (album) by Nick Cave & The Bad Seeds 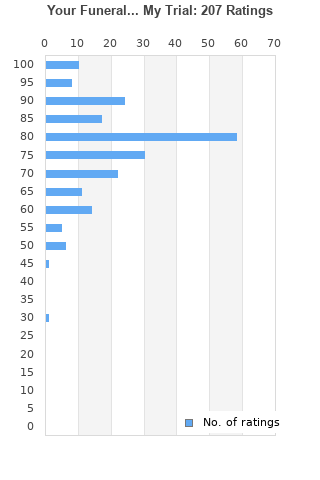 Your Funeral... My Trial is ranked 11th best out of 25 albums by Nick Cave & The Bad Seeds on BestEverAlbums.com.

The best album by Nick Cave & The Bad Seeds is The Boatman's Call which is ranked number 371 in the list of all-time albums with a total rank score of 5,202. 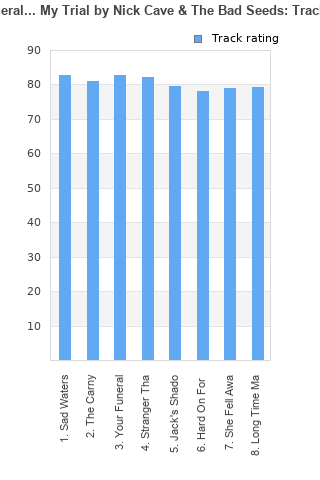 Your Funeral... My Trial rankings

Your Funeral... My Trial collection

Your Funeral... My Trial ratings

Outliers can be removed when calculating a mean average to dampen the effects of ratings outside the normal distribution. This figure is provided as the trimmed mean. A high standard deviation can be legitimate, but can sometimes indicate 'gaming' is occurring. Consider a simplified example* of an item receiving ratings of 100, 50, & 0. The mean average rating would be 50. However, ratings of 55, 50 & 45 could also result in the same average. The second average might be more trusted because there is more consensus around a particular rating (a lower deviation).
(*In practice, some albums can have several thousand ratings)
This album is rated in the top 4% of albums on BestEverAlbums.com. This album has a mean average rating of 78.0/100. The trimmed mean (excluding outliers) is 78.0/100. The standard deviation for this album is 12.0.

Your Funeral... My Trial favourites

Your Funeral... My Trial comments

this is the best. period.

In my opinion, this is the best of the early Nick Cave albums. Your funeral... my trial, is a brooding masterpiece. Kicking off with, sad waters, one of the most beautiful songs Cave has ever written, and that's followed by the even better circus fable, the carny, a stunning track, Nick Cave at his atmospheric best. The title track is great as is the chilling, stranger than kindness. Elsewhere, there's the brilliant, jack's shadow, and closing cut, long time man, in fact it's all fantastic. Another superb Nick Cave album.

Nick Cave has never released a bad album which puts him out on his own amongst even the grest solo artists. This is one of his most melodic discs and largely unheralded.

This one's a grower, not a shower. Not very accessible at first, but if you get hooked on Nick Cave you'll eventually fall in love with it.

Favorite tracks: "The Carny", "Stranger Than Kindness", Your Funeral, My Trial", "She Fell Away"

There are real moments of brilliance here, but it is probably a bit too challenging to be accessible to casual listeners. Mostly recommend for die-hard Cave fans.

Your feedback for Your Funeral... My Trial