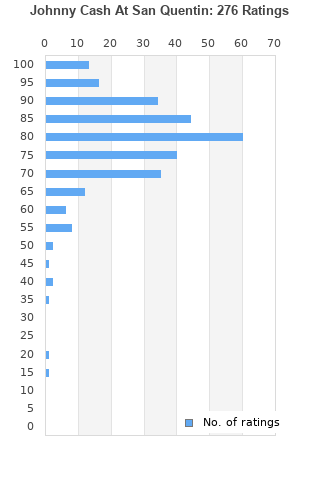 At San Quentin is ranked 4th best out of 108 albums by Johnny Cash on BestEverAlbums.com.

The best album by Johnny Cash is At Folsom Prison which is ranked number 324 in the list of all-time albums with a total rank score of 6,100. 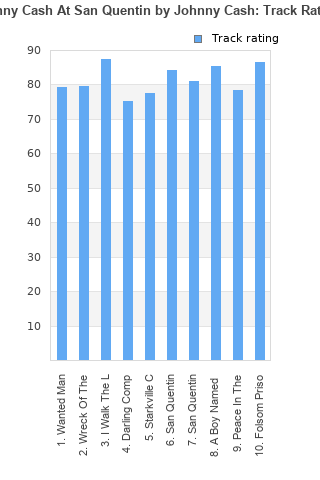 Outliers can be removed when calculating a mean average to dampen the effects of ratings outside the normal distribution. This figure is provided as the trimmed mean. A high standard deviation can be legitimate, but can sometimes indicate 'gaming' is occurring. Consider a simplified example* of an item receiving ratings of 100, 50, & 0. The mean average rating would be 50. However, ratings of 55, 50 & 45 could also result in the same average. The second average might be more trusted because there is more consensus around a particular rating (a lower deviation).
(*In practice, some albums can have several thousand ratings)
This album is rated in the top 2% of albums on BestEverAlbums.com. This album has a mean average rating of 78.0/100. The trimmed mean (excluding outliers) is 79.1/100. The standard deviation for this album is 13.9.

Pales in comparison to Folsom Prison, but still a great album on its own.

Dominating the prison crowd while at the height of his powers.

This is such an underrated album. Johnny has done a great performance

Another 'live in jail' album from the rock'n'roll outlaw himself, Johnny Cash. Like Folsom, it sounds a little tame to modern ears, but it's still an enjoyable album, just not as great as it's reputation suggests.

What others said basically. This album is in no way inferior to the Folsom one. I may even slightly prefer this. Splitting hairs though.

Recorded just a year after his classic set at Folsom Prison, JOHNNY CASH AT SAN QUENTIN is far from a rehash of that now legendary show. Not only is the set list completely revamped, but Johnny's performance is even more engaging and often comedic between songs. At one point he pays tribute to original guitarist Luther Perkins, who had died the prior year. While many of the songs featured are related to prison life, Johnny and wife June briefly take a more spiritual tone towards the end of the set without getting being preachy or overly pious. I would view this album as a perfectly complement to the FOLSOM PRISON record because it is so different and can easily stand alone in it's worthy achievements.

Almost as good as Folsom Prison. Don't overlook - it covers new territory, and is just as connected.

The defining moment comes on the song "San Quentin." The crowd of convicts simply EXPLODES with adoration for Cash and vitriol for the prison as they hang on to every word of the song:

"San Quentin, may you rot and burn in hell!
May your walls fall and may I live to tell!
May all the world forget you ever stood.
And may all the world regret you did no good."

The response is so thunderous that Cash plays the song a second time immediately thereafter. Here you have one of the biggest stars in the world speaking directly to the hearts of some of the "lowest" men in the world and the connection is electric.

Add to that the fact that you have Cash favorites "I Walk the Line" and "Folsom Prison Blues," plus the premiere of two great new songs: the Bob Dylan/Johnny Cash penned "Wanted Man" and Shel Silverstein's hilarious "A Boy Named Sue." And of course, if you pick up an extended CD re-release of the album, it has even more classics than the 10 issued on the original release.

Cash always amazes me with his ability to mix humor, vulgarity and spirituality. His mastery of all three are what made the prisoners love him, and why this album will always be one of my favorites.

Your feedback for At San Quentin