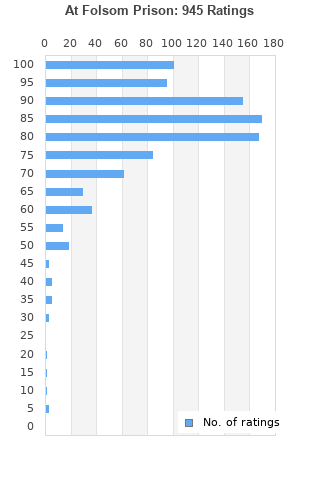 Cash, Johnny : At Folsom Prison/at San Quenti CD Expertly Refurbished Product
Condition: Very Good
Time left: 2h 51m 59s
Ships to: Worldwide
£3.06
Go to store
Product prices and availability are accurate as of the date indicated and are subject to change. Any price and availability information displayed on the linked website at the time of purchase will apply to the purchase of this product.  See full search results on eBay

At Folsom Prison is ranked as the best album by Johnny Cash. 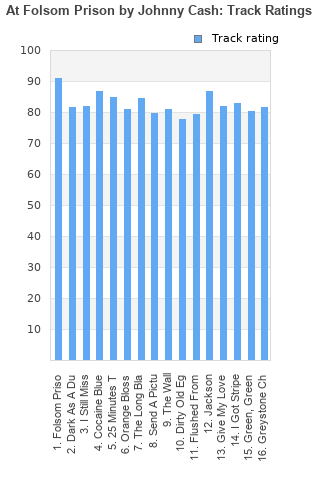 Rating metrics: Outliers can be removed when calculating a mean average to dampen the effects of ratings outside the normal distribution. This figure is provided as the trimmed mean. A high standard deviation can be legitimate, but can sometimes indicate 'gaming' is occurring. Consider a simplified example* of an item receiving ratings of 100, 50, & 0. The mean average rating would be 50. However, ratings of 55, 50 & 45 could also result in the same average. The second average might be more trusted because there is more consensus around a particular rating (a lower deviation).
(*In practice, some albums can have several thousand ratings)
This album is rated in the top 1% of all albums on BestEverAlbums.com. This album has a Bayesian average rating of 82.5/100, a mean average of 81.8/100, and a trimmed mean (excluding outliers) of 82.6/100. The standard deviation for this album is 14.1.

I loved the energy from this, it really felt like a good time the entire album. Funny how music has changed, and this is truly all about the lyrics and the pacing. Really like it.

This is truly one for the museums! I do not much like live albums tbh but this is great. The performance, the audience, the background story, Johnny's attitude... a game changing, landmark record!

Music is already great but the backstory behind the iconic performance adds to its legacy. A landmark in American music.

For the full and better experience seek out the expanded edition , you get concert 1 in the morning and concert 2 in the afternoon with additional tracks that don't appear on the original album including the awesome duet "Long-Legged Guitar Pickin' Man" as well as as support acts Carl Perkins and the Statler Brothers performances

For me, the music was good, but the interaction with the crowd and the dialogue throughout were what really made this enjoyable.

I'm not a fan of live albums, or of country music, but this album excels nevertheless. Cash is at his best here, with his best music. The running dialogue with the inmates adds to the performance.

I'm not a fan of live albums, or of country music, but this album excels nevertheless. Cash is at his best here, with his best music. The running dialogue with the inmates adds to the performance.

Johnny Cash is one of my all time favorite musicians. He had such a talent of making musically simple songs but managing to add such emotion to these songs.

Your feedback for At Folsom Prison