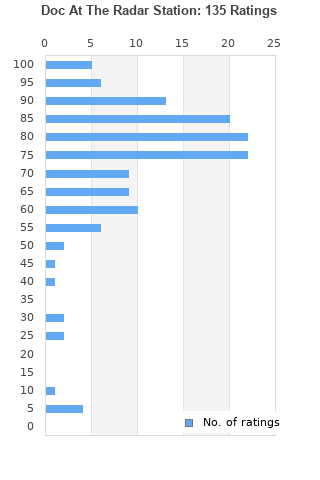 Captain Beefheart And The Magic Band ‎Doc At The Radar Station Japan Mini LP
Condition: Like New
Time left: 2d 6h 41m 13s
Ships to: Worldwide
$29.99
Go to store
Product prices and availability are accurate as of the date indicated and are subject to change. Any price and availability information displayed on the linked website at the time of purchase will apply to the purchase of this product.  See full search results on eBay

Doc At The Radar Station is ranked as the best album by Captain Beefheart & The Magic Band.

Listen to Doc At The Radar Station on YouTube 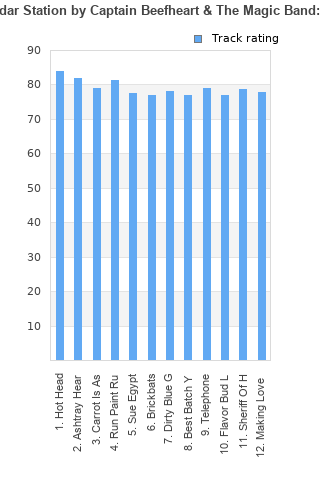 Doc At The Radar Station rankings

Doc At The Radar Station collection

Doc At The Radar Station ratings

Rating metrics: Outliers can be removed when calculating a mean average to dampen the effects of ratings outside the normal distribution. This figure is provided as the trimmed mean. A high standard deviation can be legitimate, but can sometimes indicate 'gaming' is occurring. Consider a simplified example* of an item receiving ratings of 100, 50, & 0. The mean average rating would be 50. However, ratings of 55, 50 & 45 could also result in the same average. The second average might be more trusted because there is more consensus around a particular rating (a lower deviation).
(*In practice, some albums can have several thousand ratings)
This album is rated in the top 24% of all albums on BestEverAlbums.com. This album has a Bayesian average rating of 74.5/100, a mean average of 72.8/100, and a trimmed mean (excluding outliers) of 74.6/100. The standard deviation for this album is 18.4.

Doc At The Radar Station favourites

Doc At The Radar Station comments

Following a relatively fallow creative period for the Captain, the master returned to form with the album 'Shiny Beast'. In my opinion, as great a record as this record is, his follow-up, 'Doc At The Radar Station', is even better. This album is a kind of distillation of 'Trout Mask' for the post-punk generation. It is a record in which the Captain controlled many of the excesses of the former, but nevertheless lost none of his ascerbic wit and visceral brilliance. It's a though the master was purposely playing his post-punk students at their own game while simultaneously maintaining a respectful creative distance. Although the Captain had laid the template for the next generation a decade before, many uninformed observers might reasonably be mistaken for believing that with 'Doc', he was an immitator rather than an innovator. This ranks as one of the Captain's greatest ever achievements.

Personally, I love Trout Mask Replica very much, and it is just 2 spots behind this on my chart, but........nothing will ever truly beat this.

Your feedback for Doc At The Radar Station