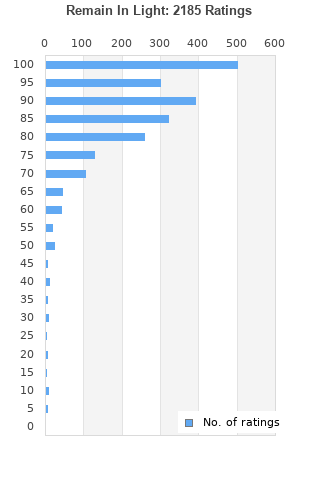 Talking Heads - Remain in Light - Cassette 7599260954
Condition: Very Good
Time left: 16h 37m 24s
Ships to: Worldwide
£14.99
Go to store
Product prices and availability are accurate as of the date indicated and are subject to change. Any price and availability information displayed on the linked website at the time of purchase will apply to the purchase of this product.  See full search results on eBay

Remain In Light is ranked as the best album by Talking Heads. 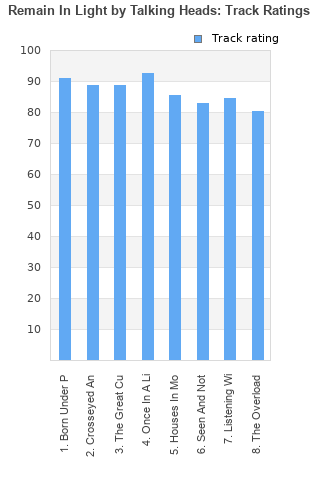 Rating metrics: Outliers can be removed when calculating a mean average to dampen the effects of ratings outside the normal distribution. This figure is provided as the trimmed mean. A high standard deviation can be legitimate, but can sometimes indicate 'gaming' is occurring. Consider a simplified example* of an item receiving ratings of 100, 50, & 0. The mean average rating would be 50. However, ratings of 55, 50 & 45 could also result in the same average. The second average might be more trusted because there is more consensus around a particular rating (a lower deviation).
(*In practice, some albums can have several thousand ratings)
This album is rated in the top 1% of all albums on BestEverAlbums.com. This album has a Bayesian average rating of 87.2/100, a mean average of 86.0/100, and a trimmed mean (excluding outliers) of 87.2/100. The standard deviation for this album is 14.3.

It took like more than 5 listens for me to rated this 100/100 fully. It's tight instrumentation, polyrhythmic groove beats, abstract lyrics, Eno production and worldbeat influence what made this album extraordinary.

This album is amazing!! It features some interesting and scary lyrics combined with groovy and head-bopping songs. The beginning starts off loud, while at the end, it ends off calm. Out of the whole album, i say The Great Curve is the best song here. It's such a catchy song...
Overall, I love this album! Give it a listen!

Take a look at this album! It is absolutely glorious, such a blast!

This is unironically great for an album being labelled "post-punk". It's way more hip and bombastic than the genre actually does. Maybe it's the half-new wave blood kicking in constantly on the brains of the members.

One of those classic albums that I definitely respect and admire, but can't say I really like.

This is some guud musik. I love this album

Certainly the Head’s most ambitious album. However, the music as a whole doesn't do it for me. The rhythms aren't as funky or easy to dance to as the rhythms on there previous album, Fear Of Music, and the lyrical writing isn’t as meaningful as the songwriting on Speaking in Tongues. Overall, I don’t see why people fawn over it.

2020-11-01 This is the revered Talking Heads album in my circles, but a noticeable drop in quality on side B keeps it from being my favorite. 85/100

First half is very good. Last 4 songs are not.

Your feedback for Remain In Light