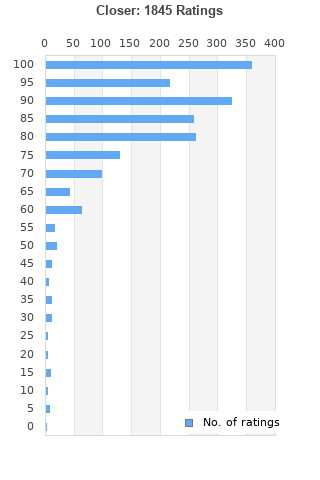 Joy Division - Closer (Vinyl LP Record Album) Cut from 2007 Remasters NEW!
Condition: Used
Time left: 8h 2m 58s
Ships to: Worldwide
$46.99
Go to store
Product prices and availability are accurate as of the date indicated and are subject to change. Any price and availability information displayed on the linked website at the time of purchase will apply to the purchase of this product.  See full search results on eBay

Closer is ranked 2nd best out of 12 albums by Joy Division on BestEverAlbums.com.

The best album by Joy Division is Unknown Pleasures which is ranked number 32 in the list of all-time albums with a total rank score of 32,836. 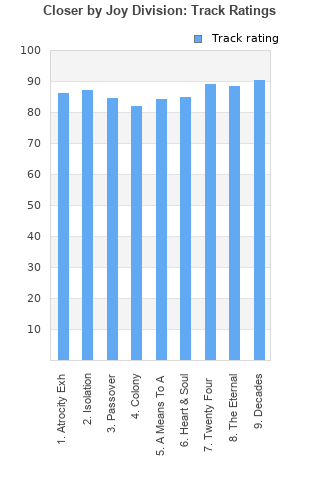 Rating metrics: Outliers can be removed when calculating a mean average to dampen the effects of ratings outside the normal distribution. This figure is provided as the trimmed mean. A high standard deviation can be legitimate, but can sometimes indicate 'gaming' is occurring. Consider a simplified example* of an item receiving ratings of 100, 50, & 0. The mean average rating would be 50. However, ratings of 55, 50 & 45 could also result in the same average. The second average might be more trusted because there is more consensus around a particular rating (a lower deviation).
(*In practice, some albums can have several thousand ratings)
This album is rated in the top 1% of all albums on BestEverAlbums.com. This album has a Bayesian average rating of 85.5/100, a mean average of 83.9/100, and a trimmed mean (excluding outliers) of 85.6/100. The standard deviation for this album is 15.9.

Is there a more painfully hopeless album? I highly doubt it.

I absolutely loved their debut so I was really stoked to hear this one. Boy was I disappointed... I don't understand what everyone here is going on about. It's not terrible but it did not live up to the hype for me. Sorry Joy Division fans, I actually really tried to like this.
Twenty Four Hours was a dope track though!

Late 1979 to early 1980: tracks for what would become ‘Closer’ recorded with Martin Hannett once more at the helm

18/07/1980: ‘Closer’ released posthumously 3 days after what would have be Curtis’s 24th birthday to critical acclaim

Damn straight!! I have nothing more to add

Just a teensy little bit less good than Unknown Pleasures. Fantastic nonetheless. It's a little bit more upbeat than their debut, but it's still infinitely dreary.

Sadly, this album does not do it for me.

The swan song from short-lived post-rock luminaries Joy Division is markedly more finessed and emotionally nuanced than the band's universally hailed debut record, Unknown Pleasures. Closer, their second and concluding collection of music, is a paradigm shifting, soul excursion into the psyche of frontman Ian Curtis during his final days. Due to this saddening alignment of events, the album acts both as a monument of post-rock music but also as a scientific, psychological documentation of a virtuoso battling mortal depression. At times, knowing the events that would unfold, some of Curtis' poetry may be too searing for certain listeners. Rest assured, they can take solace in the transcendent beauty of the music itself.

The LP emerges with Atrocity Exhibition, a tribal tonal shift for the quartet, which features drummer Stephen Morris as the focal point of the track, extending the invitation to the listener as Curtis croons, "This is the way, step inside". Track two features the airy, hissing Isolation during which Bernard Sumner's synthwork fills the sonic space like a gas leak. Cavernous and harrowing, Curtis murmurs, "Surrendered to self preservation, from others who care for themselves, a blindness that touches perfection, but hurts just like anything else." Percussion, as touched upon earlier, is a large component of the album's might. This is showcased astutely on side two opener, Heart and Soul, where Morris' hypnotic drumbeat is pushed to the forefront of the mix as Peter Hook's accordant bassline hovers close behind. Lyrically, Curtis must ponder his sacrificial preference, proclaiming, "Heart and soul, one will burn." The final album track in the band's canon is Decades, an icy, sparkling ode to the destructive nature of trauma and a youth unfulfilled. Synth whirls in tandem with Morris' punctual drum hits create the illusion that time is spiraling away from the narrator with no way to correct the nefarious rotation. Curtis sings, 'Weary inside, now our heart's lost forever, can't replace the fear or the thrill of the chase, each ritual showed up the door for our wanderings, open then shut, then slammed in our face," contextualizing his forlorn disappointment.

Vocalist Ian Curtis wouldn't live to see the release of his final, most significant piece of art. Closer's album cover serves as an eerie testament to what lies between the lines of the poetry confined within. The sense of mourning is thoroughly encapsulated in the black and white starkness of Bernard Pierre Wolf's photo of the Appiani Family Tomb in Genoa. Closer embodies its namesake as a conduit to occupy remarkable proximity to death and emotional turmoil. From the debris left behind from Joy Division's Shakespearian conclusion, a new artistic force was constructed. New Order would go on to have commercial and critical success for two decades, all the while enduring the immense pain of their phantom limb, a fallen brother in arms. Closer is Ian Curtis' gift to the world, in all its shimmering beauty and soul-demolishing despair.

"Now that I've realized how it's all gone wrong,
Gotta find some therapy, this treatment takes too long,
Deep in the heart of where sympathy held sway,
Gotta find my destiny, before it gets too late."

Your feedback for Closer