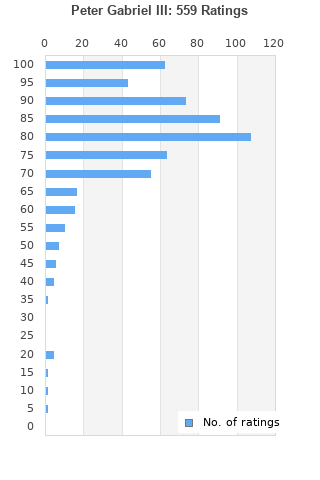 The best album by Peter Gabriel is So which is ranked number 256 in the list of all-time albums with a total rank score of 7,415. 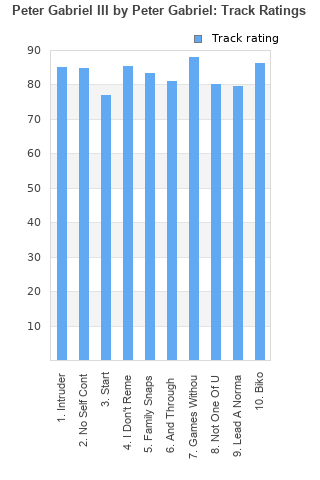 Rating metrics: Outliers can be removed when calculating a mean average to dampen the effects of ratings outside the normal distribution. This figure is provided as the trimmed mean. A high standard deviation can be legitimate, but can sometimes indicate 'gaming' is occurring. Consider a simplified example* of an item receiving ratings of 100, 50, & 0. The mean average rating would be 50. However, ratings of 55, 50 & 45 could also result in the same average. The second average might be more trusted because there is more consensus around a particular rating (a lower deviation).
(*In practice, some albums can have several thousand ratings)
This album is rated in the top 1% of all albums on BestEverAlbums.com. This album has a Bayesian average rating of 81.5/100, a mean average of 80.7/100, and a trimmed mean (excluding outliers) of 81.7/100. The standard deviation for this album is 14.6.

Very good experimental album that has a lot of great tracks, separates his solo career from Genesis era
Highlights: No Self Control, I Don't Remember, Games Without Frontiers, Biko

Epic, benchmark album from Peter. His best, maybe, but certainly signaled a hard break from Genesis.

I really like Games Without Frontiers....nothing like it on 80s college rock radio except maybe Talking Heads...

Great album and definitely one I think everyone should hear. I personally prefer So but can definitely see why people might prefer this one, maybe in time I will too. Not sure why more people don't like the Instrumental Start I know is short but I think it's great.
Favourite Tracks: Biko, And Through the Wire, Start and of course Games Without Frontiers (always great with Kate Bush and she sings on my favourite Peter Gabriel song Don't Give Up)
Weakest track: Lead a Normal Life and not mad on Family Snapshot

I like So, but this may be his best. Way better than anything Phil Collins did.

A brilliant collection of strong political songs by Peter Gabriel. Family Snapshot and Games Without Frontiers are pure gold. A great listen.

My favorite PG album without doubt. Fair enough to those who prefer So but PGIII is much more my style, reminiscent of contemporaries like Talking Heads but you're never going to mistake Peter Gabriel for anyone else, and this album has his mark all over it.

Intruder opens things in what can only be called a rather creepy fashion, but that is a testament to the fact it works. High marks to the great Robert Fripp lending his great style to a few songs here, especially I Don't Remember. Everyone knows Games Without Frontiers which is of course great, and Biko ends things in the most PG way possible.

Agree with a previous commenter who said this album is why Gabriel left Genesis. While I'd be lying if I said think either party improved after that split, this is a consistently high quality effort that is unmistakably the result of years of growth on Gabriel's part, and I recommend it for anyone who is even slightly inclined to call themselves a fan.

What a pleasure it was to hear 'Games Without Frontiers' and 'Biko' for the first time in donkey years , definitely reminded me what great songs they both are.

The rest of this album is pretty good also , especially track 1 'Intruder' which IMO is a good as any on the album . Musically there's some interesting stuff such as track loops , xylophones , whistling and Phil Colin's drumming .

If you are a music fan I can't recommend this album more highly .

Your feedback for Peter Gabriel III