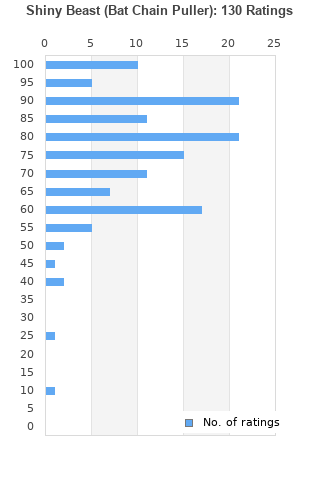 Captain beefheart & the magic band shiny beast bat chain puller 180 g wb vinyl
Condition: Used
Time left: 3d 12h 5m 1s
Ships to: Worldwide
$29.69
Go to store
Product prices and availability are accurate as of the date indicated and are subject to change. Any price and availability information displayed on the linked website at the time of purchase will apply to the purchase of this product.  See full search results on eBay

Shiny Beast (Bat Chain Puller) is ranked 2nd best out of 4 albums by Captain Beefheart & The Magic Band on BestEverAlbums.com.

The best album by Captain Beefheart & The Magic Band is Doc At The Radar Station which is ranked number 2382 in the list of all-time albums with a total rank score of 666. 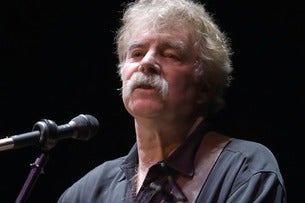 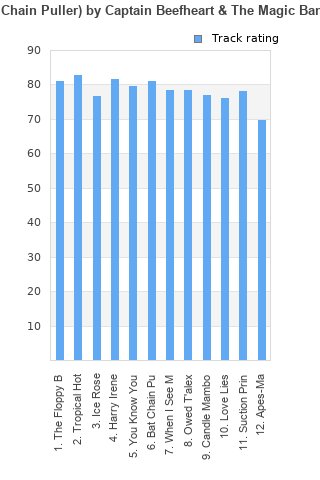 Rating metrics: Outliers can be removed when calculating a mean average to dampen the effects of ratings outside the normal distribution. This figure is provided as the trimmed mean. A high standard deviation can be legitimate, but can sometimes indicate 'gaming' is occurring. Consider a simplified example* of an item receiving ratings of 100, 50, & 0. The mean average rating would be 50. However, ratings of 55, 50 & 45 could also result in the same average. The second average might be more trusted because there is more consensus around a particular rating (a lower deviation).
(*In practice, some albums can have several thousand ratings)
This album is rated in the top 7% of all albums on BestEverAlbums.com. This album has a Bayesian average rating of 76.3/100, a mean average of 75.5/100, and a trimmed mean (excluding outliers) of 76.5/100. The standard deviation for this album is 15.7.

If you're accustomed to and love Captain Beefheart's sound and unorthodoxies, you'll love Shiny Beast (Bat Chain Puller). Fantastic arrangements, no instrument is too prevalent in the mix, it all blends into a beautiful mass. And if you're like me and saw synthesizer in the credits and said to yourself, "Oh no," I wouldn't be too worried.

Better than TMR, better than Safe as Milk. I'm sober, and I'm serious. This is like all the best of Beefheart's eccentrities, but in what is a very accesible piece of work. Lovely guitar work on most of the tracks.

Favourite tracks: Bat Chain Puller, Candle Mambo.. But you know what, most of the tracks are on similar level I think.

Although I disagree with you, I understand how you arrived at that conclusion. I was initially torn between including either this or the brilliant 'Doc At The Radar Station' in my list. However, after much thought, I finally settled on the former. I find this to be one of Beefheart's most uncompromising and intriguing albums. In my view, it's one of the most musically diverse and spectacular works the Captain ever produced. The album bristles with vitality and imagination that transcends the kinds of kitsche elements associated with cocktail lounge and salsa - assentuated by the prominent sounds of the marimba and trombone - of the kind you refered to. The album maintains a revolutionary cutting edge that's never far from the surface.

Following a relatively fallow creative period for the Captain, the master returned to form with this brilliantly uncompromising, acerbic and vibrant tour de force of an album, arguably his greatest record since 'Trout Mask Replica'. It was as though the post-punk aesthetic that Beefheart invented (which at the time the release of this album was now taking shape) had rejuvinated his creative juices once more. The sonic experience on this album is spectacularly visceral and it still sounds as revolutionary now as it did 35 years ago. A critical re-evaluation of this brilliant work is long overdue.