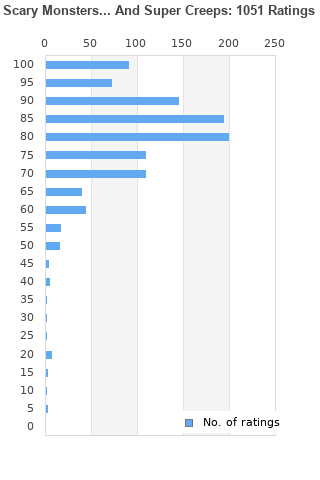 Scary Monsters (And Super Creeps) is ranked 8th best out of 88 albums by David Bowie on BestEverAlbums.com.

The best album by David Bowie is The Rise And Fall Of Ziggy Stardust And The Spiders From Mars which is ranked number 9 in the list of all-time albums with a total rank score of 57,386.

Listen to Scary Monsters (And Super Creeps) on YouTube 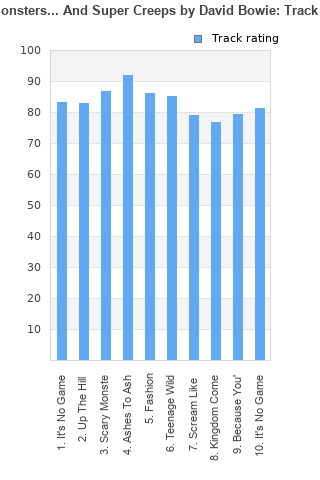 Rating metrics: Outliers can be removed when calculating a mean average to dampen the effects of ratings outside the normal distribution. This figure is provided as the trimmed mean. A high standard deviation can be legitimate, but can sometimes indicate 'gaming' is occurring. Consider a simplified example* of an item receiving ratings of 100, 50, & 0. The mean average rating would be 50. However, ratings of 55, 50 & 45 could also result in the same average. The second average might be more trusted because there is more consensus around a particular rating (a lower deviation).
(*In practice, some albums can have several thousand ratings)
This album is rated in the top 1% of all albums on BestEverAlbums.com. This album has a Bayesian average rating of 81.2/100, a mean average of 80.4/100, and a trimmed mean (excluding outliers) of 81.2/100. The standard deviation for this album is 13.4.

Love the guitar work on this, and the bass on Ashes to Ashes is great. Highlights are Ashes to Ashes, Fashion and Teenage Wildlife. One of his best albums for me.

This is a solid record but it isn't up there amongst his greatest releases. It is quite an experimental album which means that there are quite a few strange moments for us to decipher so this record needs a few listens to properly digest it. This also means that there is a high chance of all the songs on here either really hitting or really not which is the main problem with the release. Songs like the title track, Ashes To Ashes and Teenage Wildlife benefit massively from this experimental nature as they sound so fresh even today and they are extremely infectious. Then there are the closing songs on the record amongst a few more which are just quite dull and can sound slightly dated. However, Bowie is extremely consistent throughout and so is the instrumental performances. Overall, there are some brilliant songs on here but the record can't maintain the consistency it needs to be considered an all time great.

The pros and cons of being an “avant-garde art rock” musician. There’s always lots of creativity, plenty of risks taken.

On this album, several of the risks pay off (Ashes to Ashes and Teenage Wildlife, most notably). And some do not (the last few songs aren’t great). Still a fascinating album, in all, due to the change in direction it signals.

Ashes to Ashes was the big hit, I remember watching the utterly bizarre video on Top of the Pops. I hated the video and didn't like Bowie much as a teenager. How things change... Generally a good album and interesting listening experience.

this is the album that got me hooked on mr bowie.the album that started the new romantic sound in the uk. he was always ahead of the rest.i love super creeps/ up the hill backwards as much as the 2 bigger hits.

A top 5 Bowie for sure...at a apex of avant garde & more popular.

A generally successful bridge between the more challenging Berlin trilogy and the high-gloss Let's Dance era.

Great album to throw Bowie into the next decade, he was not just the biggest artist of the '70s, he is here to stay!

Really solid record, one of Bowie's best from the 80s and probably one of the better new wave albums ever.
Best song(s): Up the Hill Backwards; Scary Monsters; Ashes to Ashes; Fashion

Your feedback for Scary Monsters (And Super Creeps)