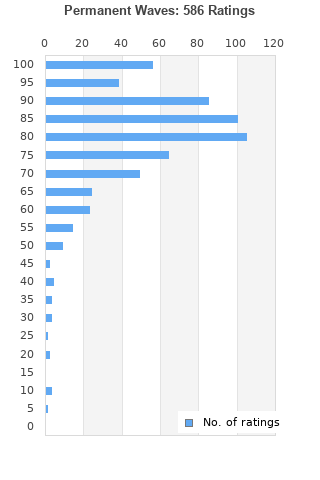 Permanent Waves is ranked 3rd best out of 37 albums by Rush on BestEverAlbums.com.

The best album by Rush is Moving Pictures which is ranked number 153 in the list of all-time albums with a total rank score of 11,156. 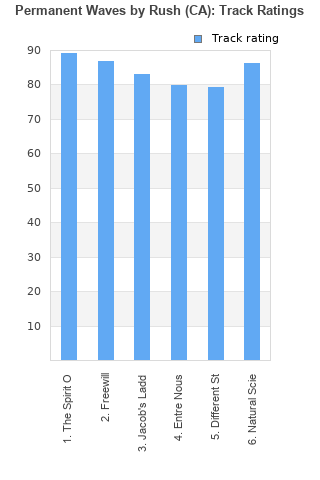 Rating metrics: Outliers can be removed when calculating a mean average to dampen the effects of ratings outside the normal distribution. This figure is provided as the trimmed mean. A high standard deviation can be legitimate, but can sometimes indicate 'gaming' is occurring. Consider a simplified example* of an item receiving ratings of 100, 50, & 0. The mean average rating would be 50. However, ratings of 55, 50 & 45 could also result in the same average. The second average might be more trusted because there is more consensus around a particular rating (a lower deviation).
(*In practice, some albums can have several thousand ratings)
This album is rated in the top 1% of all albums on BestEverAlbums.com. This album has a Bayesian average rating of 80.8/100, a mean average of 79.8/100, and a trimmed mean (excluding outliers) of 80.9/100. The standard deviation for this album is 15.1.

One of Rush's best

Another solid Rush album with great opener and closer.

A superb album. This was my first real introduction to Rush. I immediately took to Jacob's Ladder, Entre Nous and Different Strings which are still amongst my favourite ever tracks by anyone. The only weak point for me is the closer which is a shame, I've never taken to it.

After going overboard with the previous album, we hear a more grounded Rush here. Still firmly rooted in progressive rock, the tracks don't beat around the bush and don't overstay their welcome. Not perfect, but highly recommended.

Great album by Rush. Entre Nous and freewill are my favourites.

My favourite Rush. It's incredibly consistent and good, every song was my favourite at some moment and this is all around one of the best albums to listen to at any given time. Currently, my favourites of the bunch are Different Strings, Jacob's Ladder and Freewill.

Your feedback for Permanent Waves