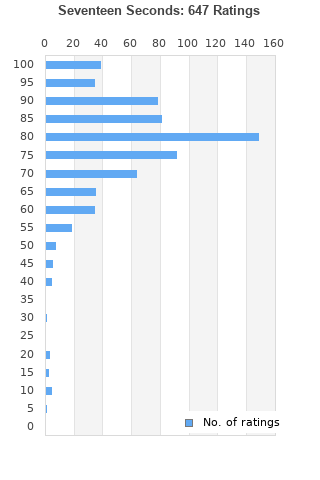 The Cure - Seventeen Seconds Picture Disc
Condition: Used
Time left: 12h 19m 22s
Ships to: Worldwide
£35.00
Go to store
Product prices and availability are accurate as of the date indicated and are subject to change. Any price and availability information displayed on the linked website at the time of purchase will apply to the purchase of this product.  See full search results on eBay

Seventeen Seconds is ranked 5th best out of 37 albums by The Cure on BestEverAlbums.com.

The best album by The Cure is Disintegration which is ranked number 35 in the list of all-time albums with a total rank score of 31,093.

Kulture Club with The Cure tribute The Curse
The Mixx, Pasadena, United States. 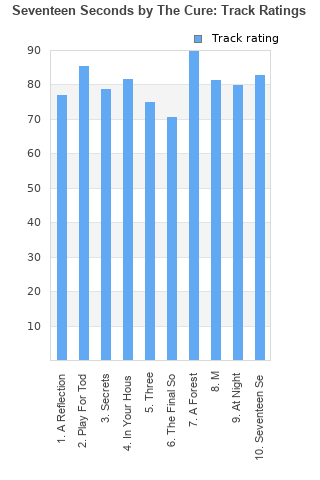 Rating metrics: Outliers can be removed when calculating a mean average to dampen the effects of ratings outside the normal distribution. This figure is provided as the trimmed mean. A high standard deviation can be legitimate, but can sometimes indicate 'gaming' is occurring. Consider a simplified example* of an item receiving ratings of 100, 50, & 0. The mean average rating would be 50. However, ratings of 55, 50 & 45 could also result in the same average. The second average might be more trusted because there is more consensus around a particular rating (a lower deviation).
(*In practice, some albums can have several thousand ratings)
This album is rated in the top 3% of all albums on BestEverAlbums.com. This album has a Bayesian average rating of 78.6/100, a mean average of 78.0/100, and a trimmed mean (excluding outliers) of 78.7/100. The standard deviation for this album is 13.8.

Very atmospheric - one of their best for me. Love A Forest, Play for Today, Secrets and the title track.

This album shows the cards of what later would make albums like "Pornography" and "Desintegration" so great.

Innovatory album. I wish that synthesizer sounds were quite louder.
Favourite: "A Forest"
Least: "The Final Sound", "In Your House"

My favourite album by The Cure.

It's one of those albums perfect for a dreary rainy day.

Feels very minimal as if Smith produced the whole thing in his basement, it all builds up momentum to "A Forest" which is probably their best song.

"Play for Today", "In Your House", and "M" are other highlights.

Highs: In Your House, Play for Today, A Forest, Seventeen Seconds, Secrets

The Cure's second album takes the punky sounds from their debut but now fuses them with the more gothic sounds they would now employ for a few more albums. It's certainly a good record, although it takes a few listens to fully digest it, but, faith, is a superior record in my opinion. Still, nothing wrong with this LP; play for today, and, a forest, are superb. Easily in the top five Cure albums.

For me it's better than "Faith" and "Pornography". In fact, this is my favourite Cure album, a perfect balance between punk beginnings and more cold wave, synthetic sounds. "In Your House", "Play For Today", "Forest", "M"... many highlights.

This album is one of my top 100 albums you can check out on this site (including additional comments on my history in music).
I first listened tothis album at a friend's house. I suppose this album was one of my first introductions in what we later called New wave (or in this case maybe cold wave).
The chilling atmosphere of songs like "A Forest" (which has long been one of my favorite tracks") and "Play for Today" really struck me, even if the guitars were not really the most important element on this album.

Great album, one of my favourite The Cure albums.

Your feedback for Seventeen Seconds