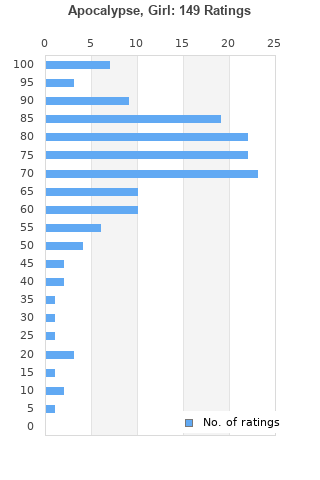 Apocalypse, Girl is ranked as the best album by Jenny Hval. 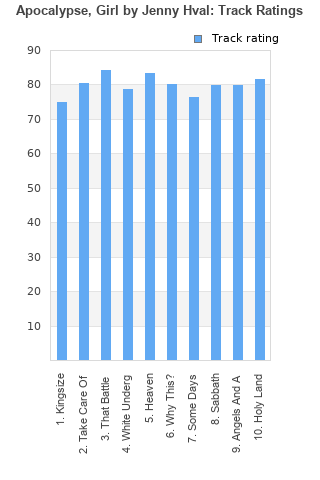 Rating metrics: Outliers can be removed when calculating a mean average to dampen the effects of ratings outside the normal distribution. This figure is provided as the trimmed mean. A high standard deviation can be legitimate, but can sometimes indicate 'gaming' is occurring. Consider a simplified example* of an item receiving ratings of 100, 50, & 0. The mean average rating would be 50. However, ratings of 55, 50 & 45 could also result in the same average. The second average might be more trusted because there is more consensus around a particular rating (a lower deviation).
(*In practice, some albums can have several thousand ratings)
This album has a Bayesian average rating of 72.3/100, a mean average of 70.9/100, and a trimmed mean (excluding outliers) of 72.2/100. The standard deviation for this album is 18.9.

It’s way too easy to diminish the accomplishments of Nordic female pop singers by saying they all sound like each other, but the first thought I had after listening to this album was how much it reminded me of the last Susanne Sundfør album. Which is relevant because I was quite disappointed by her new album and wanted something more in the vein of that last one. I should note however that Jenny Hval is very much an idiosyncratic musician and this album is a real joy.

Best track: That Battle Is Over. A great, dreamy rhythm plus the best lyrics on the record.

Man, this album makes me FEEL THINGS. Hval is so self-revealing she makes everyone else look like a coward. Kingsize summons the most horrible feelings of dread (NOT THE BANANAS), Take Care Of Yourself aches with the weight of a million vaginas, and on Heaven after she says "I want to sing religiously", does she literally turn into a bird and start flying into the night sky? Good grief, what a beautiful voice. It's a raw confronting experience somewhere in the vicinity of an ego death, attacking parts of my psyche that were laying dormant. There's so much gravity here that it demands complete attention and doesn't work any other way. She's one of those rare artists that seems to have the ability to connect a transmitter directly from her brain into yours. Her lyrics are like those weird fuzzy early morning thoughts you have as you're waking up, where it feels like you're solving some really important internal puzzle and everything is equal and nothing is taboo and your conscious identity hasn't fully uploaded yet so the real fundamental essence of what you are has a chance to- damn, it's gone. It's not so much that her music is otherworldly and escapist, it's more like she draws your attention to the strange ambiguous elements of what it means to be a human being in waking life. The kind of thing your brain likes to shift its awareness away from whenever it can in favour of the mundane. Apocalypse, Girl is a temporary escape into reality.

Proud to be alive in this day and age.

I enjoy it thoroughly.

Must have had my head up my arse to have not been listening to this every day since the moment it was released.

The nightmares are still kinky and capriciously disorientating, but she's getting ever closer to finding out what's on the other side of that big, dark wall.

There was some good material here but overall I liked her previous albums better.

I'm not convinced by every thing she tries. But overall it's really good, and the last track is damn near sublime.

Your feedback for Apocalypse, Girl