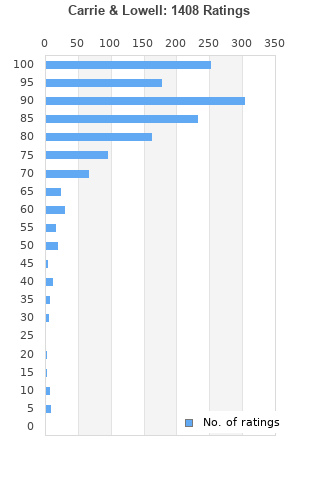 SUFJAN STEVENS - CARRIE & LOWELL [DIGIPAK] USED - VERY GOOD CD
Condition: Very Good
Time left: 22h 22m 51s
Ships to: Worldwide
$9.55
Go to store
Product prices and availability are accurate as of the date indicated and are subject to change. Any price and availability information displayed on the linked website at the time of purchase will apply to the purchase of this product.  See full search results on eBay

Carrie & Lowell is ranked 2nd best out of 16 albums by Sufjan Stevens on BestEverAlbums.com.

The best album by Sufjan Stevens is Illinois which is ranked number 46 in the list of all-time albums with a total rank score of 27,907. 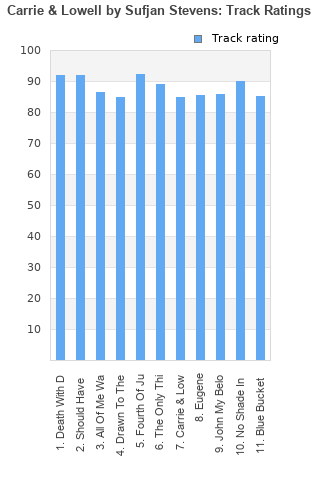 Should Have Known Better
Rating: 92 (432 votes)Comments:

Rating metrics: Outliers can be removed when calculating a mean average to dampen the effects of ratings outside the normal distribution. This figure is provided as the trimmed mean. A high standard deviation can be legitimate, but can sometimes indicate 'gaming' is occurring. Consider a simplified example* of an item receiving ratings of 100, 50, & 0. The mean average rating would be 50. However, ratings of 55, 50 & 45 could also result in the same average. The second average might be more trusted because there is more consensus around a particular rating (a lower deviation).
(*In practice, some albums can have several thousand ratings)
This album is rated in the top 1% of all albums on BestEverAlbums.com. This album has a mean average rating of 85.0/100. The trimmed mean (excluding outliers) is 86.4/100. The standard deviation for this album is 14.8.

Carrie & Lowell is sober, sad, and crushing. Stevens writes beautifully about his troubled relationship with his mother and the self destruction that follows. The instrumentation, to be honest, is rather forgettable. I can't really remember any notes or melodies from this album. Still, it is a solid work and i hope it brings him comfort.

I guess Sufjan noticed his fanbase became filled with hipsters who are more interested in nostalgia than traditional themes like cities and god and christmas. He actually sounds more like an indie artist than a saturated folk artist on this one for the first time. Reminds me a lot of The Velvet Underground (the album). Therefore a 6/10, it's not going to inspire future generations to change music history, because it moves in an already long-existing genre. But it does move, he incorporates electronic sounds and studio gimmicks perfectly to make it more than it appears. And the songwriting is good, much better than previous albums.

This is basically Illinois but about his family and childhood as opposed to a whole state, and that premise really sets Sufjan up for arguably his greatest record. His lyrical abilities were destined for a project this personal, imagine every song have the same impact as Casimir Pulaski Day... that's this album.

Sufjan Stevens is a genius. For 15 years now, the singer-songwriter from Detroit has been offering us memorable albums: I remember his masterpieces as "Michigan" or "Illinois". A true jack-of-all-trades, he experimented with various musical styles such as folk, baroque pop, electro on "The Age of Adz" in 2010 or even hip-hop with his side-project "Sisyphus". But in 2015, he decides to put away all the synthesizers and other crazy experiments for his seventh album: "Carrie & Lowell" with a very poignant theme. Indeed, this is the most upsetting and introspective record of Sufjan Stevens because it is about the mourning of his mother, Carrie, who died in 2012. Carrie was an alcoholic, manic-depressive and schizophrenic. When he was five, she married Lowell, her stepfather who now heads Asthmatic Kitty Records, Sufjan Stevens' label. It was during this time that they would have shared many moments together. The result is an extremely wistful and sensitive album. Carrie & Lowell is not just a collection of Sufjan Stevens' personal memoirs but a way to mourn properly like any human.

this album to me is like a lost love I continue to recall, it leaves a scar of remorse in me which the lyrics depict. This album came into my life in late 2015 and like any relationship blossomed a year in.

this album became a place I could go to. Having lost two friends of mine, one 20 and another 22, this became a way to mourn for them. I would walk back from parties in my student town and plug this album In and just bask in the sheer brilliance of the soft and beautiful song writing that washed over me.

Sufjan created something beautiful, truly beautiful. If you need to grieve, grieve to this, it's honest and sad but wonderfully comforting and almost holy in its emotional sincerity.

Easily his most personal and perfected album. It's simplicity in sound forces you to not only hear him but listen to him and feel him. It is the darkest, saddest album I've ever heard, and every time I listen I can't help but only imagine the pain and confusion he went through after his mother passed. He is quite religious and never swears, so use of the F word in "No Shade In The Shadow Of The Cross" is utterly heartbreaking.

Your feedback for Carrie & Lowell