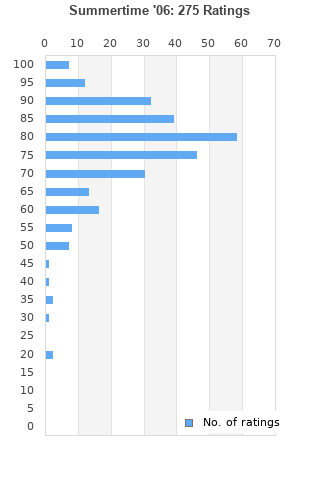 Summertime '06 is ranked as the best album by Vince Staples. 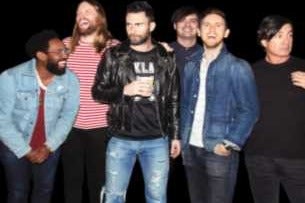 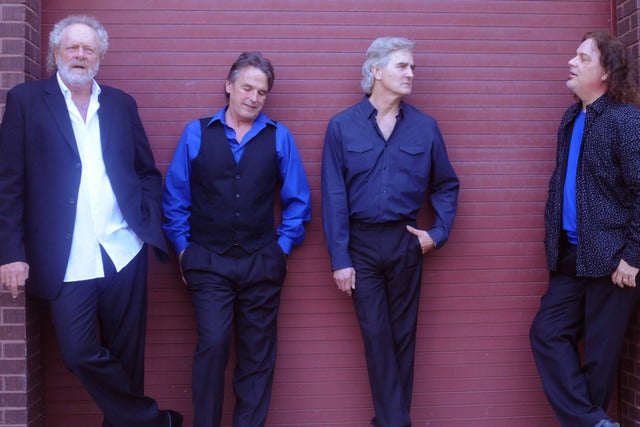 The Grass Roots
The Showroom at the Golden Nugget, Las Vegas, United States. 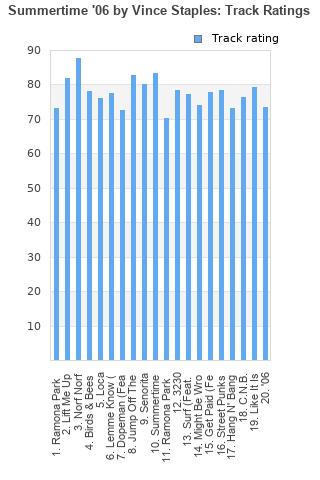 Rating metrics: Outliers can be removed when calculating a mean average to dampen the effects of ratings outside the normal distribution. This figure is provided as the trimmed mean. A high standard deviation can be legitimate, but can sometimes indicate 'gaming' is occurring. Consider a simplified example* of an item receiving ratings of 100, 50, & 0. The mean average rating would be 50. However, ratings of 55, 50 & 45 could also result in the same average. The second average might be more trusted because there is more consensus around a particular rating (a lower deviation).
(*In practice, some albums can have several thousand ratings)
This album is rated in the top 4% of all albums on BestEverAlbums.com. This album has a Bayesian average rating of 77.4/100, a mean average of 76.7/100, and a trimmed mean (excluding outliers) of 77.6/100. The standard deviation for this album is 13.1.

I usually begin by commenting on the production, but here I feel like making an exception., becayse I am such a big fan of his rapping. His delivery is a bit weird, a bit like he doesn't even care anymore, maybe that's why it's so addictive and so memorable. Most of the guests are in the same mood, too. This attitude is further reflected on the production. It's like something is about to happen, it slowly builds up, but it never comes to fruition, it stops the very last moment before it does, it simply doesn't bother any more. All of the above are closely related to the concept of the album and in that regard make more sense. It deals with the summer of 2006 - wow, how did you figure this out, amazing - and how it changed everything for the worse, it signified the loss of innocence ("Rounds up in that chamber, I'm a gangsta like my daddy My mama caused another problem when she had me They found another dead body in the alley They found another dead body in the alleyway Stacking paper, I'm a gangsta like my granny It's money over everything if you ask me They found another dead body in the alley They found another dead body in the alleyway I'm "stop-and-pop"-ing like a shooting guard My seat is back, I'm too relaxed, not moving out this car") and with it the loss of everything he loved ("My teachers told me we was slaves My mama told me we was kings I don't know who to listen to I guess we somewhere in between My feelings told me love is real But feelings known to get you killed I feel as if I'm misconstrued I spend my moments missin' you I'm searchin' for atonement Do I blame my darker tone? I know somethings are better left unsaid And people left alone Pick up the phone Don't leave me alone in this cruel, cruel world"). 20 tracks are arguably too much and it doesn't fully justify its length, but that's more or less my only complaint about this album.

Not for me. The beats are hard I guess but this new school hip hop just never cuts it for me.

An amazingly concise double album. It honestly feels like its 35 minutes. It flows so effortlessly, and never loses its atmosphere.

From his name alone, I was hoping for something gospelly, most likely because I was imagining him as a descendant of Mavis Staples. Then I realised that Mavis Staples has no children and it is possible for two people in the same industry to have the same surname yet not be related. Regardless, this is a treat, matching subtly trippy production with hilariously blunt lyrics such as “I feel like fuck Versace/they rapin’ niggas’ pockets”.

Best track: Jump Off The Roof. Admittedly my favourite part is the screamy sample that runs through the whole theme. Is it just me or has there been a sudden surge in the number of hip-hop tracks that have taken samples from early seventies Eastern European prog rock?

Impressive debut, has a particularly trepid, impressionistic quality that makes it stand out even if he still has(had) a way to go as a performer and mc.

Yeah, this is really good, but it'd be better if it were 60 minutes of "Norf Norf."

I'm really really digging the lyricism, flows, and one of the best productions on any hip hop album I've heard recently.

A solid album but feels a little too long as it feels like it drags in some parts. Great lyrics and some original production in sections. Recommended to any hip-hop fan.

One of the best hip hop albums of 2015. Although there aren't too many stand out tracks, I feel that it does flow fairly well, and the delivery from Staples is good enough, and the album does capture that summertime feel.

Favorite Track: Lift Me Up

It took me a few listens to get into this one, but I've come to really like it. His flow is a little hard to love at first, because it's so plain, but it's impressive how he's able to say so much in one breath and just endlessly string off lines. The production sounds simple at first too but reveals itself to be pretty menacing and powerful. Not saying this is an acquired taste or that it requires multiple listens, but I can see it being difficult at first if you're expecting something else. I don't think this is the best thing Staples could make though, and I look forward to seeing him expand and maybe add more variety to his music.

Your feedback for Summertime '06